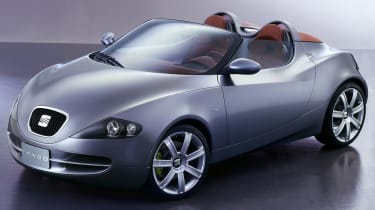 The Tango makes a strong case to be one of the prettiest cars that SEAT has ever designed. The gorgeous shape was penned by Walta da Silva - a man also responsible for the Alfa Romeo 156 and the original Audi R8 - and showed a tiny two-seat roadster that, had it made production, would have had the wow factor to upstage the original Audi TT.

Trotting out of the same VW Group stable as the TT meant that, even in concept form, the Tango seemed like a plausible production prospect. Power came from a 1.8-litre turbocharged engine, sending its 178bhp to the front wheels through a six-speed manual gearbox. Sadly, SEAT, or its VW Group bosses, didn’t see the potential for big sales and pursued the Altea MPV instead. 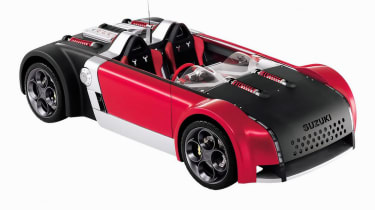 ‘If Suzuki designed a modern day Caterham Seven’: that’s the concept behind the wildly-styled Suzuki GSX-R/4, which wowed onlookers when it was revealed at the Frankfurt Motor Show back in 2001.

Spectacular looks aside, it was the engine that stole the show. The GSX-R name tag is a reference to the brand’s motorcycle range, and as such this little track-day toy was powered by the same 1,299cc four-cylinder engine used by the Suzuki Hayabusa - at the time the fastest production motorcycle in the world. That meant 173bhp at a screaming 9,800rpm, sent to the rear wheels through the bike’s six-speed sequential gearbox.

An aluminum spaceframe chassis kept the weight down to just 640kg, so while the power-to-weight ratio couldn’t match a Suzuki superbike, it was still phenomenal by road car standards. Formula 1-inspired inboard pushrod suspension controlled the huge wheels, each pushed out into the corners of the body to improve handling. 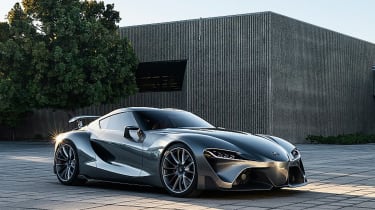 The FT-1 was Toyota’s return to its performance car roots. It was a front-engined, rear-wheel-drive sports car unveiled at the 2014 North American International Motor Show and, although never explicitly stated at the time, it was a first look at Toyota’s planned replacement for the legendary Supra.

It was visually striking, with an F1-style nose-cone moulded into the bonnet and bumper (like a McLaren-Mercedes SLR) and a wrap-around “glasshouse” cockpit borrowed from the old Toyota 2000GT. Two vents in the car’s front wings were designed to draw hot air out of the engine bay and the rear spoiler was fitted to active mounts, which could rise or lower to adjust the amount of downforce.

The interior was equally dramatic, featuring a wrap-around dash and centre console, an F1-style steering wheel which housed most of the FT-1’s major controls and a digital instrument binnacle.

Toyota revealed little information about the engine which powered the FT-1 concept. The only detail it disclosed was that it wouldn’t be a hybrid, but a “high output” internal combustion engine. We now know that Toyota and BMW were working jointly on a 3.0-litre turbocharged six-cylinder petrol unit, which powers the Supra and new Z4 production cars.

We now know that the production Supra hasn’t strayed too far from the FT-1’s design brief, roughly retaining its exhaust and headlight shape, as well as its double-bubble roof and “glasshouse” cockpit. 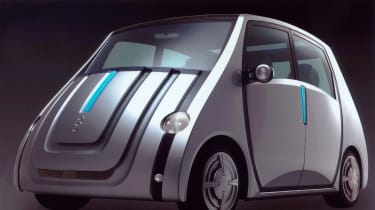 The ’pod’ is a common theme at motor shows today, urban transport bubbles that promise to autonomously whisk people around the cities of the future. Well, back in 2001, Toyota was on the pod bandwagon early with the aptly named Toyota Pod concept.

The quirky city car was one of no less than 17 concept cars that the firm trundled out at the Tokyo Motor Show that year. It made no claims of autonomous driving but instead promised to sense your moods by collecting biometric data and have a gentle word to calm you down if your pulse or perspiration rates got too high.

Better still, the Pod lets others know its mood by changing the colour of the lighting on its frontal ‘face’ (red for angry, blue for sad and orange for happy) and in a move of pure genius on the part of the designers’, wags the ‘tail’ that sticks out below its rear window.

It can communicate with other cars in the vicinity, sending them messages like “Let me pass” and “Thanks”. Meanwhile, the interior contains four swivel chairs with the whole shebang controlled by the driver through a single joystick. 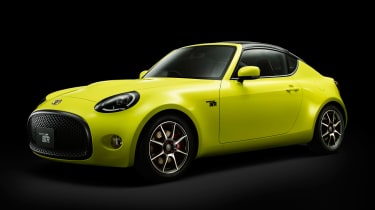 Small, simple sports cars are thin on the ground at the moment - indeed it’s a corner of the market that the Mazda MX-5 has dominated for some time. In unveiling the S-FR back in 2015, Toyota hinted that the compact, rear-wheel drive roadster format might not be hogged by its Japanese rival forever.

Under the skin was a naturally aspirated 1.5-litre petrol engine producing 130bhp. That might not sound like much but, tipping the scales at just 980kg meant that the S-FR weighed roughly one large human less than the current entry-level MX-5. It’s all the more impressive considering the fact that the S-FR is technically a 2+2 - though the tiny rear seats would probably be more suitable to a little extra weekend luggage than people.

And then there’s the way it looked: the curvy, retro style, garish yellow paint finish and frowning round headlights gave the look of an angry Pokemon. The dashboard design was a showcase of beautiful simplicity; featuring all of the major controls stacked on a single tower beside the steering wheel.

Of course, rumours still persist that an MX-5 rival might make production, but the S-FR’s front-engined layout is likely to be ditched in favour of a mid-mounted format, reviving the classic MR-2 name. 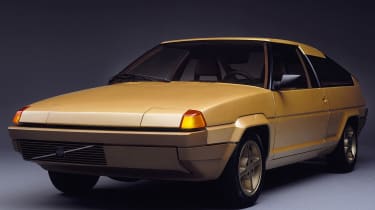 There’ll be something naggingly familiar about the 1979 Volvo Tundra concept to anyone with a soft spot for French cars of the 80s and early 90s. Volvo commissioned Bertone to come up with “something delicious” to replace the Volvo 340 but Marcello Gandini, the Italian design house’s chief designer, did too good a job.

The Volvo 343-based Tundra, with its angular, wedge-inspired shape, gold colour scheme and blacked-out pillars, was at odds with Volvo’s line-up of staid estates  and saloons. The Volvo top brass thought it was overly modern and would be difficult to sell so they rejected it.

The actual design had been based on the FW11 concept that Gandini created for Reliant a couple of years earlier and when Volvo said no, it went back into the Bertone vault only to re-emerge at Citroen where it received a far warmer reception. The Volvo Tundra became the Citroen BX - a car which sold 2.3million units in a 12-year production run. Maybe Volvo should have been braver. 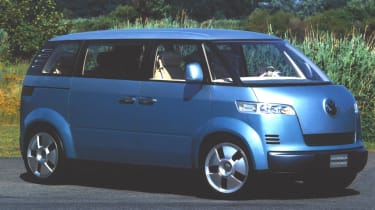 Nostalgia is a force that should never be underestimated by any concept car designer and few concept cars capitalise on that fact better than the VW Microbus concept that graced the Detroit Motor Show in 2001. VW essentially concocted a modern interpretation of the classic Microbus that was sold in the 1950s and based on the Type 2 VW Transporter.

Modern interpretations of cult classic vehicles rarely fail to make their mark and the Microbus concept prompted loud calls for a production version. Volkswagen looked to be caving-in too. In 2002 it announced that the Microbus would indeed be built, based on the then current T5 Transporter van. It never happened, and in 2005 the project was officially axed.

Volkswagen wasn’t done yet though. In 2011, the Microbus formula was re-visited by the smaller Bulli concept, which offered similar retro design themes. Then the basic idea returned again in 2017 rebranded as the I.D. Buzz electric MPV and complete with a surfboard on the roof. It seems that we might finally get our Microbus production car in this guise, with the I.D. Buzz scheduled for a 2022 launch. Just don’t hold your breath. 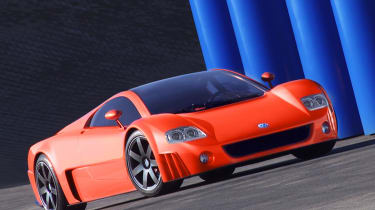 Some concept cars lack the mechanical bite to back-up their show-stopping looks but the VW W12 Nardo is an exception. When it appeared at the 2001 Tokyo Motor Show, the 591bhp 12-cylinder engine was fully plumbed-in and the 1,200kg supercar was good for a 221.8mph top speed plus a 3.5s 0-62mph time.

The Nardo, named after VW’s test track near the Italian city of the same name, was the third in a line of W12 supercars commissioned from Giugiaro to showcase VW’s new W12 powertrain. The 1997 W12 Synchro concept was followed by the W12 Roadster in 1998 and then the Nardo arrived, created by Charlie Adair with more power, scissor doors and a fully formed interior.

The Nardo would go on to set the world 24-hour speed record twice, covering 4,809.8 miles in 24 hours at an average speed of 200.6mph in February 2002. The W12 engine tech would appear in various VW Group production cars from the Phaeton to the Bentley Continental GT and the Nardo became a fixture on the front covers of various Gran Truismo video games. 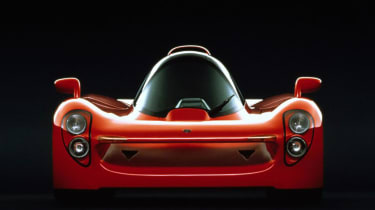 What would happen if you designed a Formula 1 car for the road? That's the question that Yamaha tried to answer with the outlandish OX99-11; a car which, like its modern-day equivalent, the Mercedes-AMG Project One, is powered by a Formula 1-derived engine.

Unlike the Mercedes, however, there are no small capacity hybrid power units to be found here. Back in 1992, atmospheric 3.5-litre engines of varying cylinder configurations were mandated by F1 rules, and Yamaha’s V12 powered the Brabham team in 1991. Throttled back from the race car’s 660bhp for the road, the OX99-11 produced 400bhp, yet still revved to an astonishing 10,000rpm red line.

Then there was the way it looked: a remarkable carbon chassis wrapped in aluminium body panels, gave the OX99 the look of a mini Le Mans prototype. There’s room for a friend, too - the tandem-style seating was inspired by Yamaha’s motorcycle division.

Click the links below to jump to different sections of the list and don't forget to tell us about your favourite concept car in the comments...