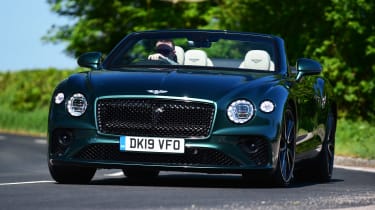 This third-generation Bentley Continental GT Convertible is incredibly expensive, but given it represents such a huge leap on from its predecessor, you get what you pay for. Refinement and comfort are excellent, it even handles well, and there’s a deep reserve of performance. The quality and image are as good as it gets, and it’s these factors that make this ultra-exclusive drop-top such a nicely executed piece of design and engineering. Bravo, Bentley.

Bentley claims this third-generation Continental GT Convertible is the pinnacle of the open-top grand tourer. A strong assertion indeed, but then look at the company’s back catalogue and factor in that the basis for this £175,100 Brit is the all-new MSB platform that underpins the Continental GT coupe – and that claim looks to have quite a strong basis.

It doesn’t take long behind the wheel to realise it’s every inch a brilliant cabriolet, too. Bentleys have always mixed dynamic prowess with comfort and luxury, and the GTC doesn’t deviate from this. With a 6.0-litre twin-turbo W12 engine that makes 626bhp and 900Nm of torque – even though this tank weighs 2,414kg – it’ll still hit 60mph in 3.7 seconds and 207mph flat out.

It’s the way it delivers its performance that’s so fitting, though. There’s little lag, and once the turbos have awoken, the hit of torque is so strong that it shrugs off that kerbweight like you might not think possible. In either the Comfort or Bentley driving modes (the latter a selection of settings for the engine, gearbox, steering and suspension chosen by Bentley’s engineers) there’s a muted whisper from the motor and exhaust as it takes off. 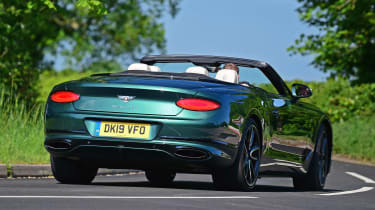 In Sport you get a much fuller, rounder sound, plus slightly sharper throttle response and gear shifts. The W12’s note mixes many different tones, but it always sounds smooth – and bassy at the bottom end until the rush and whistle of the turbos takes over.

The eight-speed dual-clutch gearbox snaps quickly enough and left to its own devices it’ll slip between gears without so much as a hiccup in forward momentum.

The air suspension mirrors this refinement as long as you don’t go for Sport mode. In Comfort the dampers submit to the road surface, controlling the movement of the huge 22-inch alloys with composure, simultaneously allowing the body to float serenely so that only gnarled country roads will pose a tough test.

Sport mode definitely sharpens up the chassis’ control and you feel the active anti-roll tech working hard to keep the car flat. But it also makes the Bentley feel a little ill at ease with itself – and the extra stiffness in the damping forces more energy through the structure, so the GT Convertible wobbles a little more.

It’s not so noticeable with the top up, but with the huge ‘Z-fold’ roof retracted (electrically in 19 seconds at up to 30mph) there’s a hint more flex. Yet thanks to a five per cent improvement in body stiffness over its predecessor it’s actually pretty well contained. Given how most Bentley owners will drive their cars, this won’t be an issue anyway – and the benefit of having the roof down is that the GT Convertible looks even more elegant.

Thanks to double glazing and the acoustic roof it’s basically as refined as any hard-top luxury car with the fabric lid in place; there’s little buffeting in the front with it down, but it’s easy to hold a conversation. A wind deflector that slots in behind the front seats makes things even calmer, even if it slightly spoils the Bentley’s sleek profile. 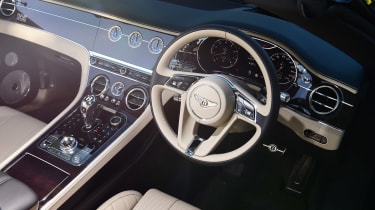 You can just about fit two adults in the rear, but legroom is tight. At least four can appreciate the splendour of the Bentley’s cabin, though. While our test car was lavished with £54,530 worth of options – adding features such as extra safety kit and driving aids, an upgraded £6,500 Naim audio stereo, the Centenary pack to celebrate 100 years of Bentley and massage seats for even more comfort – the quality of the leather, wood veneers and tech on offer is supreme.

Just as in the Continental coupe you’ll find the largest touchscreen ever to feature in a Bentley, at 12.3 inches, and a fully digital dash. Despite the advanced infotainment system, the craftsmanship is to the usual high standards, and while there might not be any analogue dials to marvel at, traditional Bentley cues such as the organ stop air vent controls are still present and work with the expensive-feeling mechanical fluidity that sets this apart from something like a Mercedes S-Class Cabriolet.

Practicality might not be too much of an issue, but the 235-litre boot should take a weekend’s worth of luggage or a golf bag, and while claimed efficiency of 20.2mpg and 317g/km CO2 means it won’t be cheap to run, at least the 90-litre fuel tank gives a decent cruising range. Besides, fuel bills on a near-quarter of a million pound Bentley aren’t likely to bother owners too much.