The new Range Rover Evoque Convertible sacrifices practicality for style, but is it any good? We find out as we drive it in the UK 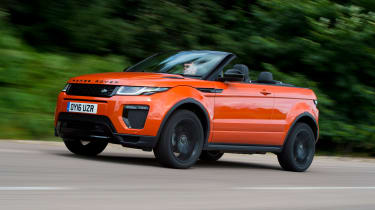 The Evoque Convertible is the weakest car dynamically in the Land Rover line-up - and it looks very expensive, given the compromises in its on-road behaviour and practicality. But it seems that plenty of customers do want an even more style-focused SUV with the ability to drop the roof, and in that respect, the Evoque Convertible has precious few rivals. It’s a niche within a niche, really - but in some ways, that makes it a class leader.

Forget the idea that the Range Rover Evoque Convertible is the answer to a question that nobody has asked. Any Land Rover dealer in the country will be able to show you a nice fat list of reservations for arguably 2016’s most controversial car as proof that the SUV craze does indeed have some room for open-topped motoring.

In any case, is it such a huge leap of faith to understand that people who sacrifice the practicality and rigidity of a two-door coupe for a cabriolet may be willing to do the same on a two-door SUV? That’s all that’s happening here - and now we’ve had a chance to see how an Evoque with its roof chopped off works on UK roads.

It’s not a cheap thing, the Evoque Convertible. It’s available only in Dynamic and Dynamic Lux trim levels, and only with four-wheel drive and an automatic gearbox. With the 178bhp four-cylinder diesel engine that’s likely to account for the majority of sales, prices start at £47,500 - or around £5,000 more than Mercedes charges for a four-wheel-drive diesel version of its C-Class Cabriolet. BMW’s 4 Series Convertible is cheaper still, although four-wheel-drive is only available on the top-spec £49,605 3.0-litre 435d xDrive M Sport. 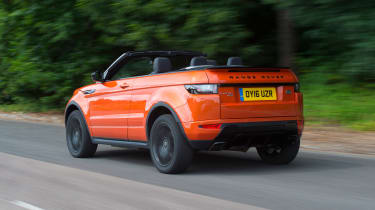 The Evoque’s other engine option, incidentally, is a 237bhp four-cylinder turbocharged petrol - but it’s even more expensive, starting at £48,200, and will sell in tiny numbers in the UK.

The Evoque Convertible’s profile remains surprisingly similar to the hard-top’s when the roof is in place. It’s a fabric item - but don’t be fooled into thinking that makes the Convertible a lighter option than the regular car. On the contrary, Land Rover has had to use a fair bit of strengthening to help the car cope with the loss of its roof - and the result is a weight gain of 277kg.

This car weighs almost two tonnes, then, and it’s pretty hard to disguise that heft. The Ingenium four-cylinder engine is capable enough, but it has to work harder than ever to move the Evoque Convertible around briskly, so you’ll find the nine-speed automatic transmission kicking down a lot on twistier roads. The raw performance figure - a 0-62mph dash in a fairly leisurely 10.3 seconds - backs this up.

UK roads are notoriously unforgiving and sure enough, the Evoque Convertible is not a car that likes to be hustled along them. Body roll is not actually as bad as you might expect - there’s a lower centre of gravity, for all the increased mass - but there’s still flex over potholes and badly rutted road surfaces. And even when you’re cruising with the roof up, you’ll notice a fair bit of wind noise and road roar from over your shoulder - as if the insulation at the rear of the hood isn’t quite as sorted as at the front. 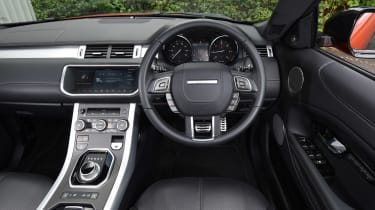 It’s not all bad, though, because lowering the roof - a process that can happen at up to 30mph and which takes 18 seconds - does give the Evoque Convertible a chance to show off its better side. That’s not to say the driving dynamics are transformed - indeed, there’s a little bit more flex and scuttle shake to deal with - but the idea of cruising gently around in an SUV but with fresh air above is just so damned unusual. You get to look down on other road users by peering over the Evoque’s deep flanks.

The header rail at the top of the windscreen extends a long way back - so far, in fact, that you may struggle to see the sky out of your upper peripheral vision as you drive along - but this, and the mix of deep sides and window glass, mean that there is precious little wind turbulence when you’re driving at anything up to 60mph. Even beyond that, it’s not unbearable.

The cabin stands up pretty well, too. It’s standard Evoque fare but that’s not necessarily a bad thing, with a decent mix of quality double-stitched leather and an easy-to-use layout. This car also gets Jaguar Land Rover’s InControl Touch Pro, a 10.2-inch infotainment system that’s easily the company’s best offering in that area to date. 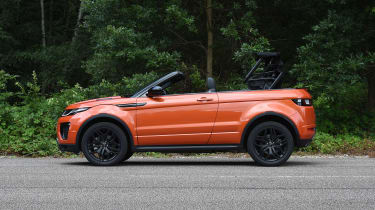 There are, of course, compromises in practicality - a trait that is hardly one of the three-door Evoque’s trump cards as it is. The boot shrinks down from 420 litres to just 251 litres - and the letterbox-shaped aperture available to put anything in there is a world away from the usability of a modern hatchback. Dynamic Lux trim brings a ski hatch that offers your only chance to load longer items (the rear seats don’t fold down at all).

It’s impossible for any reviewer to overlook the Evoque Convertible’s price. Our test car, an HSE Dynamic Lux with Phoenix Orange metallic paint and the Black Pack styling package, cost almost £55,000 - and even with a 10 per cent deposit for Land Rover’s finance deal, you’ll be shelling out more than £800 per month on it over three years and 10,000 miles.

But this is a car for those who are after a very specific mix of style, fresh air and chunky SUV capability - and the initial sales figures would indicate there are plenty of people willing to pay dearly for it.