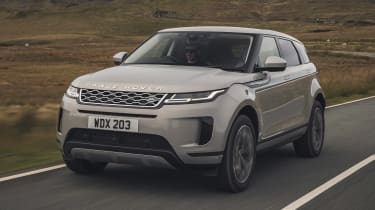 The Range Rover Evoque plug-in is a real triumph. For company car choosers, the BiK savings make this not only a sensible choice, but also a very appealing one.

Mild-hybrid versions of the Range Rover Evoque, arguably Land Rover’s most urban-focused model, have been available pretty much since the arrival of the second-generation car last year. But now, at last, there’s also a full-on plug-in hybrid version. And we’ve had our first chance to try it.

Officially titled the Range Rover Evoque P300e, the new model introduces a petrol engine that we haven’t seen anywhere else before in a Jaguar Land Rover car. It’s a 1.5-litre three-cylinder Ingenium unit that produces 197bhp. All of that output goes to the front wheels, while at the rear axle there’s a 107bhp electric motor and a 15kWh battery tucked under the back seats. The total system output is 304bhp and 540Nm of torque, enough to get the Evoque from 0-60mph in 6.1 seconds, and the car can reach 84mph on electric power alone.

From November you can order a P300e that is certified with 34 miles of engine-off range, and CO2 emissions of 44g/km. That puts it in the 10 per cent Benefit-in-Kind company car tax band – whereas the next cleanest four-wheel-drive Evoque, the mild hybrid, gets hit with the full 37 per cent.

A less-loaded model (think smaller alloy wheels, for starters) will come along in due course, offering 44 miles of range and an even lower six per cent BiK rating. 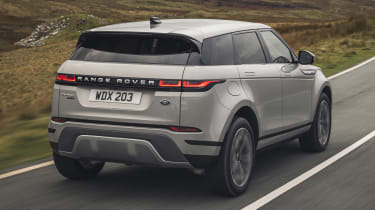 The danger with this more complex Evoque – and one with a three-cylinder engine – is that it could undo the good work of this second generation, which does, in general, feel like a proper baby Range Rover. The good news is there’s no need to worry.

Pull away and any whine from the motor itself is both distant, thanks to its location, and well suppressed. There’s comfortably enough punch to get you up to speed around town using the rear motor, and out of it, a useful meter on the digital instrument panel keeps you informed on how much of the battery’s potential you’re using.

Push the gauge beyond its limits and the engine will kick in. This is perhaps the finest single achievement of the P300e, because it does so in such smooth fashion that you really struggle to detect the transition at all.

Should you continue to prod the right-hand pedal, you’ll become aware of a three-cylinder gurgle somewhere just beyond 3,000rpm, but you’d have to be pushing along quite merrily to get to that point. The eight-speed automatic transmission feels more than comfortable with the mixed power source at its disposal, and regardless of whether you’re in town or cruising on an A-road, it shifts smoothly and intelligently to help mask its own complexity. It is an extremely relaxing, comfortable and refined car to drive all the way up to a brisk pace. 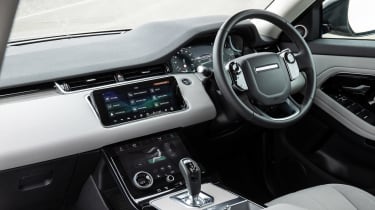 There are three operation modes. Hybrid allows the car to decide how to mix electric and petrol power, while EV forces the system to run on battery power alone for as long as possible. And you can hold the charge level, too, if you know you’re going to want EV running later in your journey.

Elsewhere, the Evoque’s trade-off between body control and ride quality still feels well judged, and there’s a real solidity to its performance over road imperfections, reflecting the extra mass; it’s now a two-tonne SUV instead of a 1,850kg one.

Off road, Land Rover is claiming that the P300e is every bit as effective as its stablemates – but we haven’t had a chance to test that just yet. However, we can say that the highlight inside the new Evoque PHEV is the arrival of Land Rover’s Pivi Pro infotainment system – which is a quantum leap compared with the old set-up seen in these images of a ‘pre-2021-model-year’ car.

You choose the PHEV just like a regular Evoque, so there are three basic trim levels – S, SE and HSE – and then the option of the sport-themed R-Dynamic pack on all of them. The entry point (driven here) seems to have enough kit for us, with leather seats, a 10-inch Pivi Pro infotainment display, LED headlights, 18-inch alloys, heated front seats and side mirrors, and a 3D surround camera with front and rear parking aids.