The new 2019 Range Rover Evoque may not look radically different from its predecessor but under the skin, it's all change

The new Range Rover Evoque is a car with bags of appeal. We wish the plug-in hybrid version were here already, but the evolution of the design, the gains in efficiency and the fresh technology should have existing owners flocking to upgrade. Moreover, there’s enough refinement, comfort and luxury to make this car feel like a proper baby Range Rover. Precisely what the Evoque should have been all along, in fact.

It must be a nightmare replacing a car like the original Range Rover Evoque – the vehicle that created a whole new area of the market when it was launched back in 2011.

But that’s what Land Rover needs to do, because while the existing car has continued to increase its sales year on year, it has done so with an ever-worsening need for fresh tech and electrification. This is what the company hopes to deliver in this Mk2 Range Rover Evoque – and after our passenger ride last month, we’ve finally been able to get behind the wheel.

To recap, the new Evoque sits on a very heavily modified version of the old car's D8 platform – different enough, it seems, to earn a new name: Premium Transverse Architecture (PTA). It has pretty much the same overall footprint as the outgoing model, but the wheelbase has been lengthened slightly in a bid to create some more room in the rear seats. 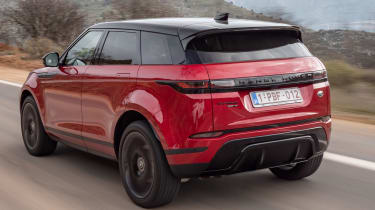 The main reason for the switch to PTA, though, is powertrains – and Land Rover’s desire to offer 48-volt electrification. In fact, the entry-level, front-wheel-drive diesel Evoque is the only model in the range not to have some form of hybridisation on board – and it’ll stand out even more at the end of this year, when a plug-in version arrives. This ought to be capable of completing short urban journeys on electric power alone.

For now, though, there’s a 48V integrated starter/generator system. It allows the car to cut its combustion engine out completely below 11mph, and helps to smooth out any judder when it's fired back up again.

That basic 148bhp diesel is the only front-drive car in the line-up, and it’s the only new Evoque with a (six-speed) manual gearbox to boot. Every other version comes with four-wheel drive and a nine-speed automatic transmission as standard. There are two more diesels, with 178bhp or 237bhp, and three petrols – 197bhp or 247bhp, as well as the 296bhp version that we had a ride in with Land Rover’s development whizz Mike Cross. 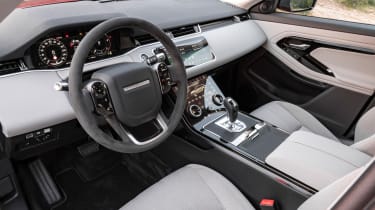 For our test here, we’re in a 237bhp diesel, which sounds odd in the current climate, but makes sense because Land Rover still expects almost four-fifths of Evoques to be powered by this sort of engine.

The goal for Land Rover’s engineers was to make a car that felt more grown-up than before, without treading on the toes of its cousin, the Jaguar E-Pace. And after several hundred miles in a 240PS Evoque diesel on the roads of Greece, we’re inclined to say that they’ve succeeded.

The biggest single gain comes in refinement. Wind the fastest diesel Evoque up to 80mph on smooth motorway and the Ingenium engine will be pulling just under 2,000rpm. And at that point, you simply won’t hear it – or very much at all, thanks to strong levels of cabin isolation and tyre roar suppression. The biggest noise at speed is probably a bit of wind rush from around the side mirrors, but even with this, existing Evoque customers should notice how much quieter it is inside.

The hybrid tech helps the diesel out around town, too, where any harshness above 2,500rpm (and there is some) could be more cruelly exposed. Instead, the electric motor cuts in as you come to a halt and is impressively smooth, while its assistance with start-up helps the Evoque to get around with a minimum of fuss.

On twistier roads there is a clear dynamic gap between the Range Rover and the E-Pace, though. The Evoque's steering has more slack around the straight ahead, and while the response does quicken as you apply more lock, it never feels as keen to rotate and aim for an apex. There’s more body roll, too, so the Evoque is less happy with sudden direction changes.

This relative shortage of involvement would be a problem, were there not a resulting benefit in comfort – but there is. Land Rover has set the car up to be an accomplished cruiser that stays just about composed enough on more winding roads. And that feels a pretty good place for the smallest Range Rover to be, especially when that polite powertrain is taken into account. It will be fascinating to see how it compares with a Volvo XC40 on the same road, given the Swede’s similar focus on comfort over agility. 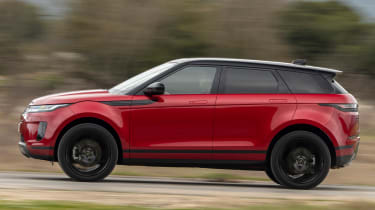 It’s worth pointing out at this juncture, though, that our car had optional 21-inch wheels that come only as part of a pack with adaptive dampers. It still rode commendably well considering the wheel size, but we’re in the dark as to whether 18-inch or 20-inch items, on regular suspension, would deliver an even better experience on the UK’s awful roads.

It’s a sign of how far the car has come that it’s hard to name any serious flaws in the driving experience. But, if there is a weak spot, it remains the automatic transmission. Jaguar Land Rover’s implementation of the nine-speed auto is getting better with every new iteration, and in general, it maintains relaxed progress in a smooth fashion. But the slightest attempt to hurry the car along a twisty road still has the potential to flummox the software and leave it scrabbling to grab a gear.

It’s particularly prone to kicking down two ratios when it’d be much easier, and smoother, to drop just one and ride along on the engine’s torque (there’s 500Nm, after all). That’s what you’ll do if you resort to using the steering wheel paddles and manual mode on more challenging roads, and – unlike in some of this car’s rivals – you will end up doing this. 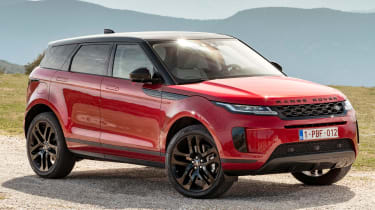 About one in a thousand Evoques will ever get truly dirty, but for those who do want to take the car off-road, it’s worth knowing that its wading depth has increased to 600mm – a full 100mm up on the old car’s figure. And it gets JLR’s Terrain Response 2 system, through which the car can 'read' the road surface beneath its wheels and decide the most appropriate setting from its four modes - Comfort, Sand, Grass-Gravel-Snow, and Mud & Ruts. Little else in the class will be able to follow the Evoque across rough terrain, for sure.

The Evoque will continue to be a vehicle that you don’t really choose with practicality in mind but the boot capacity, at 591 litres, is around 10 per cent up on the old car’s. That’s enough for a decent-sized suitcase and a couple of overnight bags or, as Land Rover is proud to suggest, a full set of golf clubs. The rear seat splits 40:20:40 (another useful touch) and if it’s lowered completely, there are 1,383 litres on offer. That’s about the same as you’d get in a smaller family hatchback.

Cabin space has been improved by the longer wheelbase, but don’t expect limousine-like accommodation in the back. You can just about get four six-footers on board but those in the rear will feel slightly snug for leg and kneeroom. 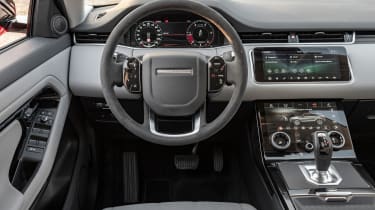 The trim levels are complex, so bear with us on this. Basic Evoques get auto LED headlights, flush door handles, rain-sensing wipers, 17-inch or 18-inch alloy wheels (depending on engine choice), heated side mirrors and windscreen, plus dual-zone climate control, a 10-inch infotainment system, front and rear parking assistance and a rear-view camera.

Step up to the S and you’ll upgrade to 18-inch wheels, regardless of engine, and get perforated leather upholstery and 10-way electric adjustment on the front seats. You also get navigation and, at last on a Land Rover, Android Auto and Apple CarPlay smartphone integration. Traffic Sign Recognition, an Adaptive Speed Limiter and auto-dimming, power-folding side mirrors also come as standard.

The standard range-topper will be HSE, which gets even more leather of a higher quality, yet further adjustment on the front seats, a different design of 20-inch wheel, gesture control for the powered tailgate and Land Rover’s new digital rear-view mirror (more of that later). You can add the R Dynamic package to all of these trims, incidentally; it costs £1,500 and brings different wheel designs and sport-themed styling tweaks.

There’s a decent walk up through the range, then; it stretches from a bog-standard front-drive diesel at £31,600 all the way to a fully laden HSE costing £51,500 with the R Dynamic pack and the 296bhp petrol motor. And that’s before you really get stuck into the extensive options list, which includes alternatives to leather such as the Kvadrat textile seen on the Velar, or for vegans out there, the eucalyptus fabric that felt great on our test vehicle. Land Rover points to strong predicted residuals and says that these should soften the blow of playing too much with the configurator, thanks to more modest increases in monthly payments. 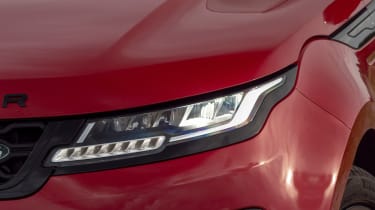 Our car, an S, had the InControl Dual Touch Pro infotainment system fitted as an option. It’s better than ever, but that doesn’t mean that it’s top of the class just yet. It can be slow to respond to inputs and the interface remains a little bit clunky, with curious animated transitions that do little but slow down the user journey. At least the Android and Apple connectivity now gives you the chance to bypass the in-car system for navigation and music streaming.

The digital rear-view mirror is a useful addition too - and we can see plenty of Evoque customers ticking its box on the options list. It uses a wide-view camera in the aerial fin on the car’s roof to get around the fact that, thanks to the merely subtle evolution of the car’s design, it’s still hard to see out of the narrow rear window. You can flick the display back to a regular mirror if you so desire - but during our two days with the car, we never felt inclined to do this, such is the clarity and extra expanse of the digital view.