We take to the track in sensational all-electric Citroen supercar, does performance match its breathtaking looks? 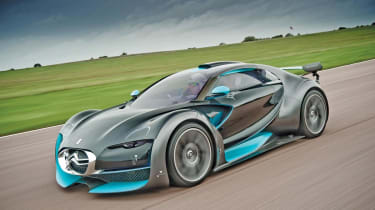 The Survolt is an impressive showcase for Citroen. Despite its cutting-edge electric drivetrain, it performs like a pure thoroughbred. The fact it was built in just three months, before its track debut at Le Mans, only heightens our respect for its designers. Its performance on the track proves how keen the firm is to demonstrate the concept’s huge potential, and we could see some of its technology on road cars soon.

The spectacular Survolt has hit the track!

Recently, we brought you exclusive studio pictures of Citroen’s all-electric supercar, but now Auto Express has been given the chance to pilot this one-off zero-emission concept in an altogether more exciting environment – the high-speed circuit of Thruxton in Hampshire.

As it creeps silently from its garage, the swooping lines and aquamarine slashes in the bodywork pack a massive visual punch. Yet despite its protruding rear wing and side skirts, the Survolt looks surprisingly small next to the assorted hatchbacks in the car park.

Getting behind the wheel is no mean feat – you have to thread your way carefully between the scissor doors and the latticed tubular steel frame, before dropping into the bucket seats.

With six-point racing harnesses holding you firmly in place, the start-up sequence begins – engineers adjust the huge array of switches mounted to the carbon dash, then we flick the bright red ignition, and the Survolt whirrs into life.

A low hum reverberates through the cockpit, but prod the throttle, and the hum soon becomes a high-pitched, jet-like whine. Acceleration is brutal, with the combined 300bhp from the two 31kw batteries (one mounted in the floor, the other between the rear wheels) propelling the concept down the pitlane exit.

As with other electric cars, the 480Nm of torque is available instantly. Factor in the two-pedal set-up, with the brakes operated by your left foot, and it feels similar to a big go-kart. On the short back straight, the Survolt clocked 132mph, an amazing figure when you consider that it was merely a static show model just a few months ago. The batteries only last for half an hour at these speeds, but a full recharge can be completed in two hours.

The rock-hard suspension is unforgiving, and our racing helmet clatters against the roll cage as the car skips over the track’s bumps and undulations. Push into corners, though, and the benefit of the stiffened ride becomes clear.

Grip from the huge tyres is extraordinary, the double-wishbone suspension set-up ensures the car changes direction with ease, and there’s plenty of feedback from the F1-style steering wheel.

The Survolt is a superb achievement. And if the firm goes on to deliver a one-make race series, we could see its technology in a roadgoing Citroen sometime soon.