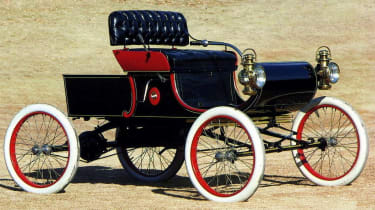 Although the success of the Ford Model T is often attributed to its early use of mass production on a moving assembly line, in fact the honour of being the first car built this way falls to the Oldsmobile Curved Dash model introduced in 1901. It lasted until 1907, and due to its affordable price and reliability the two-seater runabout sold well with 19,000 produced. The Model T was launched in 1908, and by 1927 had sold 16.5 million, but it’s fair to say the Oldsmobile showed the Ford the way!

The Curved Dash runabout was tiller steered, and powered by a single-cylinder 5hp engine with a top speed of 20mph. Runabout meant a basic style with no windscreen or doors. It also often placed the engine under the body, which in the case of the Oldsmobile Curved Dash had to be removed for access.