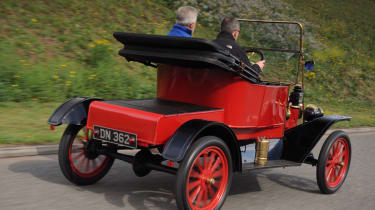 The Ford Model T made its debut in the US in 1908 and was soon a roaring sales success: it is often credited with being the first car that the ordinary person could afford.

Henry Ford’s famous moving production line was introduced to build the Model T and it meant that build time per car was slashed from 12 hours down to just 93 minutes. When the car stopped being made in 1927, over 15 million had been produced.

There were many models to choose from: a roadster, tourer and town car, plus pick-ups, vans and buses. With its brass radiator, carriage-style lamps, wooden wheels and exposed running boards, the T looks bizarre on 21st century roads - but it would have been a relatively common sight back in its day. 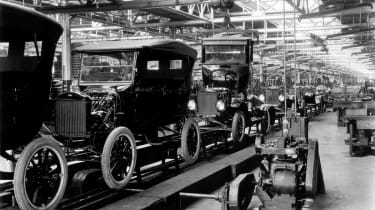 The driving experience is very odd, too - it's nothing like cars are these days. There are three pedals in the usual place, but they don’t do what you’d expect: The right pedal is a transmission brake, the middle pedal selects reverse gear, and the left pedal is used to engage drive to the two-speed transmission.

There's a brass lever on the steering column that controls the throttle, and a tall stick by your right leg is the parking brake, which works via drums on the rear axle. It's incredibly confusing: to pull away, you place the handbrake in the centre position, set some revs with the throttle and gently press the left hand pedal. To increase speed you release the pedal fully and slide the handbrake lever forward to engage high ratio.

The 2.9-litre four-cylinder engine means the Ford hits a respectable speed – and slowing down is a reversal of the process: back off the hand throttle, press the left pedal to select the low ratio – and get some engine braking – then use the right pedal, which constricts the transmission bands to slow the car.

While it doesn’t drive anything like a modern car, its production techniques and mass appeal set the template for every mainstream car on sale today.