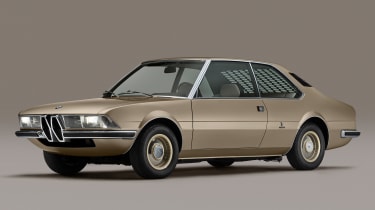 This is the BMW Garmisch concept, a modern take on an iconic concept car that went missing following its debut at the 1970 Geneva Motor Show. It has been officially revealed at this year’s Concorso d’Eleganza Villa d’Este in Italy.

The concept was originally designed by Marcello Gandini for Bertone - many of BMW’s vehicles from the 1960s and 70s were inspired and influenced by Italian design and coachbuilding. The new Garmisch was unveiled to celebrate this long-held association and pay tribute to Gandini, one of Italy’s most influential car designers.

• Concept car: the greatest concept design of all time

What makes the Garmisch special are the unique design elements such as the bold, vertical and angular variation of BMW’s kidney-shaped radiator grill. Other distinctive features include the square glass-covered headlights and the honeycomb-patterned mesh cover for the rear window, which was a must in Gandini’s designs.

Every detail of the exterior and interior has been recreated using a small selection of black and white images sourced from BMW’s Group Design and Classic department. Not only that, but Gandini himself recalled his memories and contributed to recreate the Garmisch.

“Building the BMW Garmisch for a second time gave us the opportunity to pay tribute to Mr. Gandini, recall one of his lesser-known cars and highlight Bertone’s stylistic influence on the evolution of BMW design. For me, that alone was reason enough to do this project – filling in the gaps and completing BMW’s history” said Adrian van Hooydonk, SVP of BMW Group Design.

What do you think of the BMW Garmisch concept? Let us know in the comments below...