In this video review we find out which is the king of the executive car class - the BMW 520d or the Mercedes E220?

Few areas of the new car market are more fiercely fought for than the executive car class - as you'll find out in this video review. We test two cars - the BMW 520d and the Mercedes E220.

Mercedes has only recently revised the E-Class, after just four years, telling of how competitive things are in this class. Meanwhile, BMW has just pulled the wraps of its 5 Series, too.

From the outside, the new BMW 5 Series looks pretty similar to the old version, but those with a keen eye will notice tweaked headlamps and re-profiled bumpers. It gets a 520-litre boot, but this is 20 litres less than what the Mercedes has to offer. Plus, you have to pay an extra £420 for a split fold rear seat.

Mercedes has taken a bolder approach in its facelift of the E-Class - bringing you redesigned flanks, bold LED headlamps and a completely new grille. Still, it looks a little boring alongside the sporty 5 Series, and it's a similar story inside. But, it does get a roomier 540-litre boot.

The Mercedes provides a sensible drive - the standard adaptive dampers give a really soft ride and the steering is direct and well-weighted. But, it's just not that fun.

BMW, on the other hand, has a reputation for building fun-to-drive cars, and this latest 5 Series is no exception. It manages corners with excellence, has beautifully balanced rear-wheel-drive handling and direct steering that's very well-weighted.

Both the BMW and the Mercedes cost around £32,000, while the Mercedes emits 120g/km of CO2 and the BMW, 119g/km. Ultimately, both are going to be chosen as company cars, but which one do you go for? The Mercedes is very comfortable and quiet, but the BMW is equally desirable and better to drive. Watch the video review and see what you think. 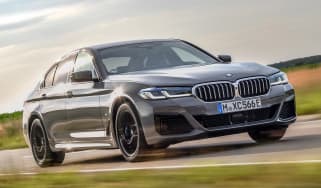 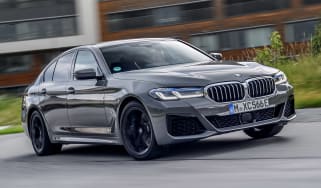