We review BMW 5 Series in M Sport trim. It looks great, but there is an emissions and tax price to pay 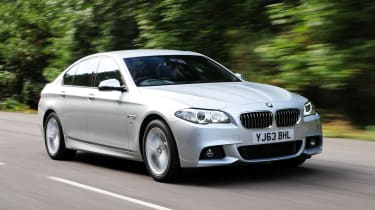 The new BMW 5 Series is as good as it’s ever been, and still heads the class with its superb blend of agile handling and impressive refinement. A huge proportion of buyers in the UK will specify their car in M Sport trim for its sporty looks, but we prefer the 520d SE, which is cheaper and more comfortable, too.

The UK’s favourite executive car, the BMW 5 Series, has been given a refresh, in a bid to keep it at the top of its game. But unlike the updated Mercedes E-Class, which looks wildly different from the car it replaces, BMW has limited the exterior tweaks to different front and rear lights, and a reshaped grille.

It’s under the skin where BMW has concentrated its efforts, removing the 520d EfficientDynamics model from the range in favour of this cleaner and more economical standard 520d.

It’s now claimed to be able to deliver 62.8mpg in SE spec, or 57.6mpg in the M Sport trim that featured on our test car (due to the bigger wheels). Emissions dip as low as 119g/km in the SE-spec car.

A six-speed manual gearbox is fitted as standard, while an eight-speed ZF automatic is an option. There’s nothing wrong with the manual gearlever’s slightly notchy action, but we still prefer the superb eight-speed auto, with its identical economy figures.

The diesel engine coughs and splutters on rolling starts – a problem that the auto’s shorter ratios and seamless shifts would mask.

The 181bhp 2.0-litre diesel could be a bit more refined at idle, but the noise soon vanishes as the revs rise. And with 380Nm of torque available from just 1,750Nm, there’s a surge of mid-range acceleration whenever you need it.

Even in M Sport spec, with stiffened springs and 18-inch alloys, the 520d remains an accomplished motorway cruiser. It’s whisper quiet and refined at high speed, while the standard Black Dakota leather upholstery in our car really adds to the 5 Series’ upmarket cabin.

As before, the controls still feel beautifully weighted, making the 5 Series much more fun than the E-Class and Audi A6 when you up the pace on a twisty road.

The majority of UK buyers are likely to opt for the M Sport model for its aggressive bodykit and bigger wheels, and we have to concede it does look great. However, our advice would be to stick with the more softly-sprung SE model and spend the £2,800 difference on the brilliant eight-speed auto and some options.