Believe it or not, it's more than three years since BMW took the wraps off its brazen-looking 7-Series. With this in mind, the German firm has carried out a raft of changes to ensure its flagship remains competitive during its twilight era - and Auto Express was first behind the wheel to try the latest model out 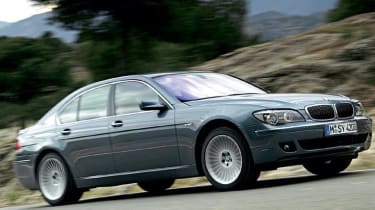 Revised engines and suspension give BMW's luxury offering a shot in the arm. Buyers put off by the original's striking looks may also prefer the facelifted model thanks to the subtle styling changes that have been made. For ultimate refinement, you should look elsewhere - but few rivals will match the 7-Series for driver appeal.

Believe it or not, it's more than three years since BMW took the wraps off its brazen-looking 7-Series. With this in mind, the German firm has carried out a raft of changes to ensure its flagship remains competitive during its twilight era - and Auto Express was first behind the wheel to try the latest model out.

Subsequent new BMWs may have lessened the visual impact of the big saloon, but its gigantic proportions and strong lines have mostly survived the mid-life facelift. While visual changes have been kept to a minimum, fans of the original will note the newcomer's more conventional rear end, with horizontal chrome trim and revised lights.

At the front, the distinctive nostrils of the kidney grille are more flared than before, and there are white indicator lenses. The redesigned headlights are now xenon as standard - adaptive units which follow the steering are an option - and revised front and rear bumpers also mark out the new car.

More significant changes are found under the bonnet. Of the six engines available, only the flagship's 6.0-litre V12 is unchanged. We drove the new 750i, which features a 4.8-litre V8. This replaces the old 4.4-litre 745i, and will be the best-selling model in the range.

To ensure the big saloon can make the most of the performance on offer, there is a choice of three revised suspension set-ups. Beyond the standard setting, a new sports package is available - comprising lower, stiffened suspension and bigger 19-inch wheels - as well as an Adaptive Drive option.

Our model was fitted with the latter. It features electronically controlled dampers which adjust according to road conditions. They also allow drivers to choose between a 'comfort' or 'sport' mode. Despite wearing optional 19-inch wheels - the 750i comes with 17-inch rims as standard - our car's ride was smooth, even in the firmer sport setting.

Admittedly, the billiard table tarmac of our test route wasn't typical of UK roads, so we'll learn more when we drive the 7-Series here. But body roll is well controlled for such a big car nevertheless.

As you'd expect given the power on offer, you never want for pace, so overtaking is a breeze. The six-speed automatic gearbox makes high cruising speeds easy to achieve and maintain, and the steering wheel-mounted buttons for the manual setting on the transmission work well.

However, on the motorway there's a surprising amount of wind noise from around the A-pillars and door mirrors. Inside, minor changes have been made to the materials, while the iDrive cabin control system is simiplified, with a trio of dash-mounted buttons for the major radio functions. As before, the 7-Series focuses more on performance and handling than ride and refinement. Rivals may be more cosseting, but they're unlikely to match the fresh German machine for driving thrills - it just depends how much you want to indulge your chauffeur!