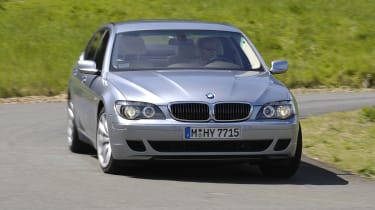 The Hydrogen 7 is an absolutely incredible piece of engineering. Thanks to its clever design, this clean-running executive motor feels exactly the same as any other 7-Series when it comes to driving. At present, the infrastructure for producing and delivering the hydrogen gas is limited, but BMW is working extremely hard to change this. Is this really the fuel of the future? Well, it's certainly a strong contender.

You don't need a crystal ball to see into the future. According to BMW, all you have to do is drive this 7-Series.

It's powered by hydrogen, a fuel that the company claims is the sav-iour of the internal combustion engine. Greener to produce and burn, it is set to appear in the tanks of a growing number of BMW models in the next 10 years. Auto Express got behind the wheel - and under the bonnet - to see what we have to look forward to.

Apart from the bold blue graphics of our test car, this special 7-Series seems totally standard. Look a little closer, though, and you'll find discreet Hydrogen badges. You can also spot gas vents under the rear bumper and in the roof, while a large translucent filler cap nestles in the C-pillar.

It's under the skin that the big changes lurk. The standard 6.0-litre V12 is heavily modified to accept both regular unleaded petrol and the cleaner gas. A large tank is located behind the rear seats and holds 8kg of liquid hydrogen, which it stores at an extremely chilly minus 250 degrees Celsius. It also meets all current crash test regulations without rupturing.

Hit the starter button, and there's a long mechanical whine, caused by hydrogen being pulled from the tank, before the engine fires. Once on the move, the car feels normal. The sole interior giveaways are a dual function fuel gauge and an 'H2' button on the steering wheel. Hit this, and you change seamlessly between fuels. Only a higher-pitched metallic zing to the engine note reveals you're burning hydrogen.

However, there are still downsides. A mere 100 Hydrogen 7 models exist, and they're not for sale. Even if they were, they'd all have to fight for a place at the handful of hydrogen fuel pumps that exist around the globe.