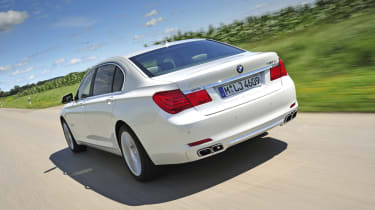 The super-luxurious, long-wheelbase BMW 760Li is a very special addition to the German manufacturer’s UK line-up, and proof that all those doubters who wrote off V12 super-saloons were wrong! Despite its pace, it can average nearly 22mpg, and emissions come in below 300g/km. An amazing car – even if it is somewhat pointless here in the UK.

With 12 cylinders and two turbos, it’s no wonder the 760Li is BMW’s fastest-accelerating car. Eclipsing even the M6 Coupé, the new motor hits 0-60mph in a blistering 4.5 seconds.

That’s all thanks to an amazing 6.0-litre twin-turbo V12… yet is this a vehicle the world needs? We’d argue not – but ignoring that for a moment, the model is very impressive. Acceleration is monumental, as is 544bhp, but it’s the 750Nm of torque that really gives the 7 its legs.

Despite soft throttle response, the turbos quickly wake up and thrust the car forward. Even at low speeds the traction control is hyperactive – the turbos blow hard straight from the off, meaning a careful right foot is needed for smooth driving.

The cabin focuses on comfort, particularly in the back. Its twin seats are fully adjustable, while double glazing and Nappa leather provide a haven of luxury. Despite plenty of space, though, the car is still little different from a 730d – and BMW admits annual UK sales could number only 50.