Few models shocked the public as much as BMW's 7-Series replacement of 2001. With a new direction of design, it was challenging to say the least - particularly inside, where most dashboard buttons were replaced by an electronic control system called iDrive. It marked something of a revolution. 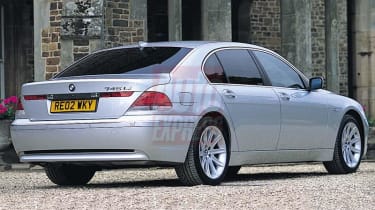 Few models shocked the public as much as BMW's 7-Series replacement of 2001. With a new direction of design, it was challenging to say the least - particularly inside, where most dashboard buttons were replaced by an electronic control system called iDrive. It marked something of a revolution. But it was too much for some, who saw no reason to choose the 7-Series over the superb Mercedes S-Class. As such, early sales were poor, a situation not helped by the lack of a diesel option. But the picture is improving - last year, 2,000 7-Series were sold, compared with 2,700 S-Classes. However, depreciation is an issue. The BMW loses plenty in a short time, meaning a once-£50k model can be yours for less than £30k - allowing you to save the price of a 318i with a car that still looks as new!Checklist * Engine: early cars suffer from a rough tickover. Software updates cured this, along with the jerky gear-shifts some versions are occasionally susceptible to. * Interior: numerous problems with the satellite navigation system. There have been many upgrades, particularly with software. Ensure used examples are up to date. * Wheels: most owners are persuaded to opt for a 19-inch wheel upgrade to give smaller-engined models a more muscular look. It does make the car more saleable, but tyres can cost up to £300 each. * Ignition: there are reports of BMW bulletins regarding a possible ignition coil problem on early cars. This is covered under warranty; a rough engine is the giveaway. * Door: remote key fobs of early models have restricted range. Later versions use a different frequency. Test both fobs - they recharge when inserted in the dash.Driving impressions The 7-Series is incredibly able, and only the 3.0-litre petrol struggles with the car's weight. Refinement is faultless and long-distance cruising effortless. How-ever, the ride quality may not be as silky as some expect, due to a sporty suspension that ensures the 7 handles as well as a much smaller car. The best choice is the 3.0 diesel, which is economical, powerful and quiet - but even it can't escape iDrive or the column-stalk automatic selector, which takes some getting used to.Glass's View When the 7-Series was launched, there were teething troubles with much of the software, the iDrive caused confusion and the car's exterior deterred many. It's the same for used versions. Demand is focused on the much slower-depreciating diesel. But big cars drop in value quickly. In the case of the 7, used buyers can expect to lose around £750 a month. There are some fairly hefty dealer bonuses on new versions too, which will further impact on used values. Jeff Paterson, senior editor, Glass's GuideLife With A 7-Series This is my third 7-Series and the best-handling yet. People have criticised the iDrive, but I don't find it a problem. It's an exceptionally good car. Peter Halls, Stoke Poges, Bucks I want my old 7 back! I used to have a 1998 728i and I adored it, so I was excited when I picked up a 735i last year. But it relies on electronics, and it's nowhere near as good to drive. Charles Chan, Tring, HertsPrevious Generation 7-Series If you're scared off by the complexity of the new 7-Series, or aren't entirely taken by its looks, then the previous-generation car could well be just what you're looking for. When it debuted in 1994, the 7-Series was quite rightfully regarded as one of the world's best cars. Its sophisticated electronics, incredible build quality and elegantly stylish lines marked it out as an executive car par excellence, and it wouldn't be beaten until Mercedes unveiled the current-shape S-Class in 1998. The last-generation Seven has managed to grow old gracefully, thanks to the simplicity of its styling. If you find an early M or N-registration car, and slap on a cheap private plate, the neighbours will be hard-pushed to believe that your 7-Series cost you less than seven grand. Yes - that's right. Today, an early version can be picked up for silly money. The first cars had a choice of 3.0-litre and 4.0-litre V8s, and both are fantastic units, with great soundtracks and impressive torque. If you don't mind a six-figure mile-age (and you shouldn't, because a 7-Series will cope easily), you can even pick up a 1994 M 730i with leather, air-con and all the toys for a piffling £4,000. You'll pay a grand extra if you want the punchier 740i. Later cars - including the incredible V12 750i - are also great value. For only £11,000 you can get behind the wheel of a 70,000-mile 750 on a P-plate. That's a car which cost a startling £71,000 when new. There's no argument, then, that the old 7-Series is one of Britain's best kept secrets on the used car scene - but buy carefully. Ignore anything without history, and check the paperwork carefully, as there are some ringers about.

Cars at this end of the market are all about the driver. The new BMW 7-Series is a real head turner that ups the ante in luxury and has a more aggressive presence on the road than the Mercedes S-Class or Lexus LS430. If you can cope with the unconventional styling and the iDrive knob, which will fall to most British drivers' non-dominant hand, then it could be the car for you. On the road, the car's a delight - we found that the 7-Series performed admirably.