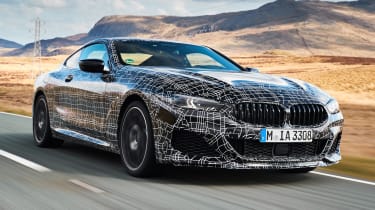 Our first taste of the new flagship BMW 8 Series is in this prototype M850i. It’s almost the finished item, and has been partly developed in North Wales. It shows, too; these are demanding roads and the 523bhp M850i tackles them with aplomb. There’s lots of chassis technology, yet all its elements are so well integrated you quickly realise it’s a poised, capable and comfortable GT coupe. We’d like sportier steering, but for now, we can’t help but look forward to trying the polished final car.

It’s a rare but exciting moment when you’re invited to drive a car that is still in its prototype stages. It’s even better when the invitation is to drive it on real roads rather than a test track – and sweeter still when you know those roads like the back of your hand.

BMW’s development team makes a twice-yearly trip to drive secret cars on the challenging roads of North Wales and, ahead of the launch of the new 8 Series in June, we were invited to try the range-topping 523bhp M850i xDrive just before its specification is finalised.

The 8 Series replaces the 6 Series as BMW’s flagship coupe, and at launch this M850i will top the range. It’s packed with technology, and the 4.4-litre twin-turbo V8 has been significantly reworked to develop more power and torque than before. It’s hooked up to a conventional eight-speed ZF auto gearbox. 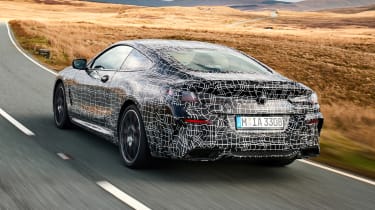 Beyond that, things get a little more interesting. BMW’s xDrive all-wheel drive is standard, as is rear-wheel steering, a new electronically controlled rear e-diff, electronic damping and 20-inch wheels. No other wheel size is offered. In fact, the only chassis option is active anti-roll bar control: “We know what is the optimum,” says Markus Flasch, line manager for the new 8 Series.

The cars we’re driving wear a camouflage wrap, which disguises some of the detail but not the size. It’s a big coupe with lines around the rear side window that are a nod to previous big BMWs. The inside is blanketed in cloth to hide as much as possible, but we’re allowed to see the instrument pack; the digital display is bracketed by an angular speedo and rev counter and will be shared with the forthcoming X5 SUV.

The V8 starts with an off-beat rumble, though as soon as we’re moving its note fades into the background. The steering feels a little light initially but gains weight at higher speeds, by which point the adaptive damping is doing a brilliant job of smoothing out the sometimes lumpy Welsh asphalt.

Sweep through a few curves, tackle a couple of tighter corners or crest a few rises, and the M850i remains poised in satisfyingly natural way. Push harder and there’s very little roll, while unleashing the strong torque of the twin-turbo V8 can’t disturb the car’s ride and composure. You do occasionally sense the M850i’s circa-1,900kg mass, though. 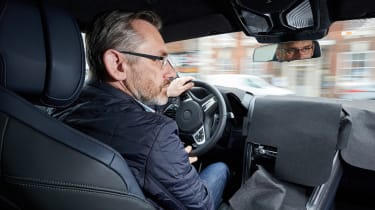 Switch from the default Comfort mode to the car’s Sport setting, and things sharpen up. The transmission holds the gears you need for best performance and response, and the engine finds its voice, too – including some pops and bangs on the overrun. It’s no Jaguar F-Type R, but the increased volume offers encouragement without denting the impressive refinement.

There’s precision in the steering, but this is one of the few dynamic elements that could be improved. The chassis absorbs the impact of a lot of the road surface, but the steering lacks that same connected feel and tactility.

The M850i is a fast and capable car, however. There is some dynamic magic in there, too, but overall it’s more a very talented GT than a drive-for-the-hell-of-it sports coupe. That’ll be the job of the M8, which will arrive later alongside a convertible and four-door Gran Coupe.