We've already driven the entry-level BMW 8 Series on European roads, but is the 840d just as good in the UK? 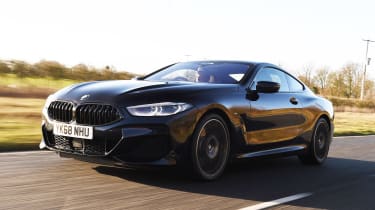 The new BMW 8 Series is a talented all-rounder – especially in 840d diesel guise. It’s more agile than a Mercedes S-Class Coupe, yet not as focused as a Porsche 911. And despite this, it neatly fulfils its brief as a sporting GT. For some, it’ll be just the ticket.

BMW has a habit of re-jigging its model names. A few years ago, the 3 Series Coupe became the 4 Series, and before that the Z3 morphed into the Z4. Now, the 6 Series has grown-up and been replaced by this: the all-new BMW 8 Series.

Yet despite taking a step up-market, the new 8 Series is slightly shorter than its predecessor. It’s wider and lower, too, which should make it sharper to drive. We’ve already tried the M850i and 840d on European roads, but this is our first chance to flex the big coupe on British tarmac.

Those squat dimensions certainly give it more presence. On a crisp winter’s morning our car’s Carbon Black metallic paint had a deep blue tinge, while the matching high-gloss details for the grille, trim and exhaust give it a menacing stance. It’s an aggressive looking car, in fact, yet far more delicately designed than a Mercedes S-Class Coupe. 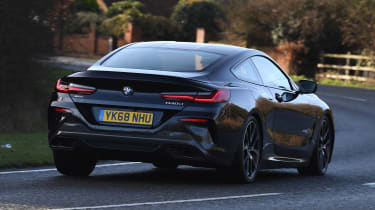 In diesel guise, the new 8 Series has surprisingly few rivals. The Merc is only available with high-capacity petrol engines, while the Lexus LC, which matches the BMW for price, throws hybrid power into the mix. But as a mile-munching GT car, the 840d makes a solid case for itself.

A real world 500-mile range and more than 40mpg tank-to-tank makes the diesel 8 Series an appealing proposition for those after a big coupe with excellent motorway manners. It doesn’t waft like an S-Class, but it rides really nicely at high speed. There’s little more than a murmur from the 3.0-litre straight-six at 70mph, while road and wind noise are well insulated, too.

Its inability to truly float over bumps and ridges means it’s infinitely more agile than the Mercedes, however. Whereas the S-Class feels like a luxury yacht, the 8 Series is more akin to a racing boat; our car’s four-wheel steering system not only makes it more manoeuvrable around town, but also more stable at speed. 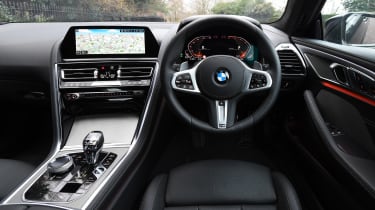 Our car came fitted with the (£2,500) M Sport Technic Package, which adds M Sport brakes, an M Sport differential and M Sport-specific styling tweaks including a different steering wheel, seatbelts and an Alcantara headlining. Our experiences in Spain suggested this was money well spent – and if your commute takes in a variety of challenging A or B-roads rather than motorways and dual carriageways, it could prove its weight in gold.

Regardless, every 840d comes with a selection of drive modes – but in our experience the Comfort setting strikes the best balance. The standard fit adaptive dampers never completely slacken, yet even in their softest configuration the car displays impressive control. In Sport it feels quite hard and a little unsettled, however, and on rougher back roads the 8 Series can appear a little fidgety.

The torquey engine offers seemingly endless surge under hard acceleration, too – even before you start playing with the Individual drive mode. While the shortened rev band of a diesel motor can limit a car’s performance, the tried and tested eight-speed ZF box prevents the car from hesitating between changes.

However, if you do opt for a brand-new 8 Series, be prepared to leave the kids at home. The back seats are tiny – and best reserved as extra storage for soft bags or shopping. The VW Golf-beating 420-litre boot sounds a decent size, too, but the compromised opening means it’s not all that practical in reality.

Up front, the 8 Series feels like a worthy flagship. The carbon core cocoons you in complete luxury, with the widescreen infotainment system still among the best in the business. It’s more complicated than some older iterations of iDrive, but the added functionality more than makes up for set-up’s operative shortcomings.