Donald Trump’s old Cadillac limo on sale for £50,000 in Gloucestershire 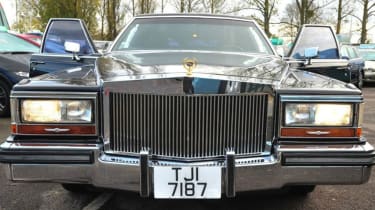 A rare, limited edition Cadillac limousine custom built for US President Donald Trump is on sale at a dealership in Gloucester for a stately sum of £50,000, it has emerged.

Built in 1988, the ‘Cadillac Trump’ was originally part of a planned run of 50 vehicles bearing the mogul’s name, but in what appears to be true Trump style, ‘the Donald’ only ever ordered one and just two units were completed by the manufacturer.

The car offered here in the UK has been on sale for a while, but was genuinely owned by the businessman himself for a period after it rolled off the production line. The limo was allegedly used by a family member - thought to be his father - before it arrived in the UK in 1991. 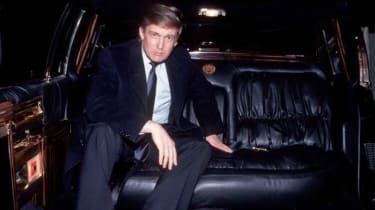 Equipped with a 5.0-litre petrol engine and an automatic transmission, the Cadillac Trump limo has 45,000 miles on the odometer and appears to be in relatively good condition. Unsurprisingly, the interior is finished with fine leather and rosewood trimmings, and even contains luxury additions such as a drinks cabinet, a paper shredder and a fax machine. It is nearly 30 years old, after all.

“This is a unique vehicle that offers a rare opportunity for collectors and enthusiasts to buy a car that will always attract interest,” said Sean Tanner, Commercial Director at Severnvale Cars. “ We know the current owner well, he bought the Cadillac ten years ago and it’s been his pride and joy and it has even starred in a couple of films, so we hope this will fetch a good price.”

• What are the worst cars in the world?

The black paintwork is believed to be original, and under the care of the car's five previous owners has avoided being patched up with any fake hues.

And while it is thought that Trump was directly involved in the design of the interior features, items like the steering wheel and the door handles don’t appear to have been modified for use by children, or adults with small hands. 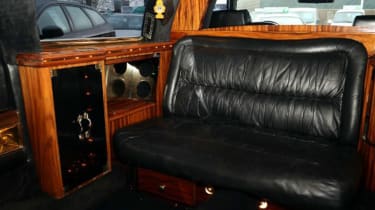 So if there’s anyone out there interested in securing a hefty chunk of American political history, this is an opportunity to yank vigorously by the hand. A fine tuned machine this may be but you will probably need to be a master in the Art of the Deal to get that £50,000 asking price down to a more palatable level.

Would you buy a car previously owned by Donald Trump? Is £50k a fair price for this one? Let us know your thoughts in the comments section below...