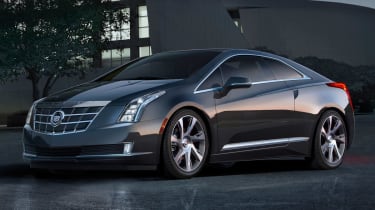 The Cadillac ELR has become the third model to be built on GM’s range-extender platform, joining the Chevrolet Volt and Vauxhall Ampera.

But while the latter two are four-door models, the ELR ups the style with a dramatic two-door coupe body that’s heavily influenced by the Converj concept shown at the Detroit Motor Show in 2009.

A huge, egg-crate grille dominates the nose - which can close for better aerodynamic efficiency - while the LED headlights sweep right back up the front wings. Sharp creases run up each side, while both the front and rear windscreens are steeply raked.

Inside, the ELR sets new standards for the Cadillac brand in terms of both design and luxury, with a swooping dash with carbon trim inserts that mirror’s the ELR’s exterior, lots of leather adorning each of the four seats; and neat features like a powered cupholder in the centre console.

A 10-speaker Bose stereo, with active noise cancellation, is standard, and the ELR also benefits from the Cadillac CUE infotainment system, controlled by voice or gestures in front of the eight-inch touchscreen on the dash.

In keeping with its high spec, the ELR gets HiPerStrut suspension, like the Insignia VXR, 20-inch wheels and adaptive dampers. What’s more, the range extender powertrain’s electric motor gets a boost in power over the Volt and Ampera, giving an extra 30Nm of torque, at 400Nm, and 207bhp total system output.

The all-electric range is around 35 miles, and total range is around 300 miles, while top speed is 100mph – making it a similar performer to the Volt. The ELR will be sold from the sole UK dealer in Manchester from late 2014, with prices likely to exceed the £34,995 currently charged for the Volt and Ampera.