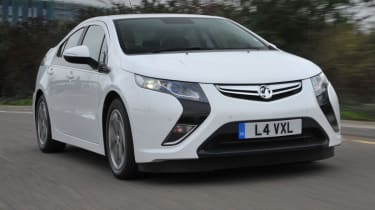 The Vauxhall Ampera, and its sister car the Chevrolet Volt, set a new benchmark for battery vehicles, because the addition of a petrol engine eliminated the range anxiety normally associated with electric drive.

The Ampera is built in the US alongside the Volt, and Vauxhall offers two models in the UK: the Positiv and the Electron. It rivals hybrid cars like the Toyota Prius, electric cars like the Nissan Leaf and efficient diesel saloons, like the BMW 320d ED.

Every Ampera comes well equipped, with two seven-inch displays, alloy wheels, a reversing camera and a DAB radio fitted as standard. But one of its biggest problems is its price - it's really expensive.

Like its sister car the Chevy Volt, the Ampera is powered by a 85bhp 1.4-litre petrol engine and a 148bhp electric motor.

Despite the hi-tech running gear, there’s nothing intimidating about the Ampera from behind the wheel. Press the start button, and you’ll hear a Star Trek-style swoosh through the speakers to let you know it’s ready to roll (there’s a similar shutdown noise when you turn it off). Then simply engage drive, release the electric parking brake, and you’re away.

It does this in complete silence when in full electric mode, but if you need the 1.4-litre petrol generator, it hums along quietly. Cruising comfort is the Ampera’s forte, and the ride is comfortable too, with only big bumps unsettling it.

Direct drive means the Ampera accelerates quickly, although the more powerful and lighter BMW i3 is quicker. Just like its rival, when the engine is assisting, which it does at motorway speeds, regardless of remaining battery capacity, it maintains constant revs.

In corners, the low-slung Vauxhall handles well. It carries its weight low in the chassis and between the axles, while wide tyres mean there’s decent grip.

The Ampera is no sports car, though, and you feel its weight in corners, while the steering doesn’t have the best feedback. Another downside is that the low front end scrapes over speed humps in town – the rubber front apron bears the brunt of the impact, but it’s still unnerving to hear.

The Vauxhall’s economy will hinge on the type of driving you do, although its larger fuel tank means you can easily travel over long distances. If you use the car on the motorway, there’s a handy hold function that allows you to save the battery charge for city use, rather than wasting it on high-speed journeys.

It’s capable of returning fuel economy of up to 235mpg and CO2 emissions of only 27g/km from its petrol-electric powertrain - although expect around 40mpg on motorway trips.

Vauxhall claims that it’s capable of travelling on pure electric for up to 50 miles, at which point the petrol engine kicks in to increase the total range to more than 300 miles. A full charge will take four hours and should cost around £1.

Unlike the Renault Twizy (which is officially classed as a quadricycle), the Ampera qualifies for the Government’s £5,000 electric car grant.

As with its rivals, the Ampera sits in the five per cent company car tax bracket and also qualifies for the Government’s electric car grant, with residuals of 34 per cent.

The Vauxhall is low and long compared with the i3, while a low ride height and extra-low rubber valance under the front bumper emphasise its ground-hugging stance. All models get aerodynamic 17-inch alloys, and the gloss black trim under the windows is an interesting design feature.

Inside, there are four individual seats, as the rear chairs are set low and positioned on either side of the T-shaped battery pack.

Up front, the driver gets a TFT screen instead of conventional dials, and this can be tailored to show a variety of information, from energy use to a speedometer. The dashboard curves around into the doors, which feature smart colour-coded gloss trim, while the raised centre console has a colour display and touch-sensitive buttons, and the gearlever is located in a recess below.

An electric parking brake frees up space for cup-holders and an armrest. Overall, the Ampera is logically laid out and is as easy to get along with as an Astra or Insignia, but the display screens aren’t brilliantly sharp.

Although it’s still limited, the Ampera is far more practical than electric car rivals like the Nissan Leaf. The petrol generator means you don't need to wait for it to charge fully before you can go anywhere.

Packing batteries, an electric motor, a petrol engine and a fuel tank into the Ampera demands some compromises. For starters it’s only a four-seater, and while all occupants get plenty of space, the boot is smaller than you’ll find in your average family hatch, and possessions are only hidden from view by a flimsy fabric cover.

The large glass rear screen boosts visibility, plus there are front and rear parking sensors and a rear-view camera. The touch-sensitive centre console takes some getting used to due to the sheer number of functions it controls.

The boot is also disappointing, with just 300 litres of space – that’s less than the Nissan Leaf’s 330 litres and much less than the Toyota Prius, which has a 446-litre boot. However, the two rear seats do fold flat to create a 1,005-litre load area.

The Ampera has been on sale since the start of 2012, but the Chevrolet Volt on which it’s based began development in 2009, and most problems should have been ironed out in this long gestation period.

Much of the basic chassis is shared with the Astra, and most of the switchgear is common between the two – the Ampera seems a well proven product. It features an eight-year/100,000-mile warranty for its electric drive system.

There are eight airbags, which helped the car achieve its five-star Euro NCAP crash test rating. One useful feature is a pedestrian alert buzzer, which can warn passers-by of the car’s presence when travelling below 30mph in full electric mode. When the Volt was tested in the US, it suffered from a post-crash fire, although parent company General Motors resolved the issue before production started.

For an alternative review of the latest Vauxhall Ampera Hatchback visit our sister site carbuyer.co.uk 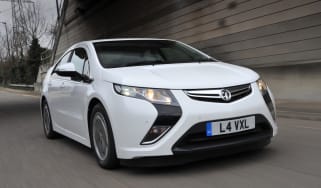 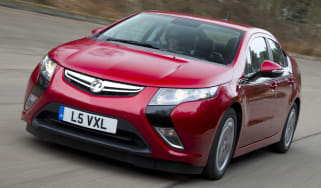 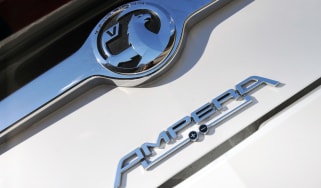 Next Vauxhall Ampera to get shorter range

The next-generation Ampera could feature a smaller battery and shorter range in a bid to drive down the price
Vauxhall Ampera: Final report 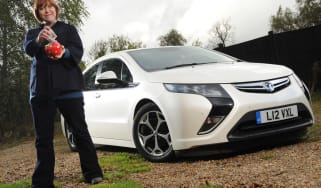 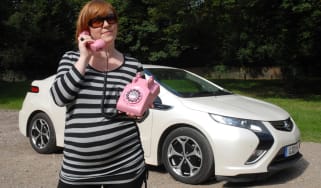 Our range extender offers a helpline for owners – and we put it to the test
Vauxhall Ampera: First report 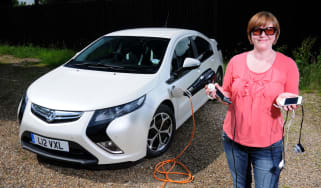 We dig out the Continental plug adaptors in readiness to take our electric car abroad
Vauxhall Ampera: First report 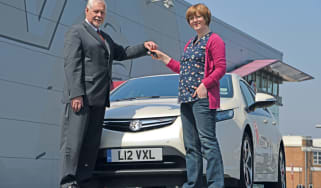 Long-awaited range-extending electric car joins fleet. So does it deliver on its promise?
Vauxhall Ampera vs rivals 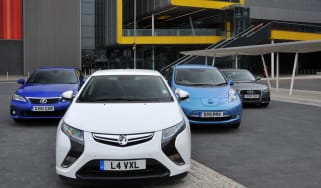 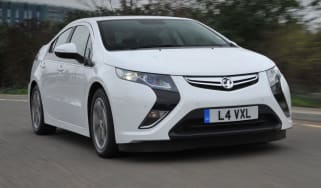 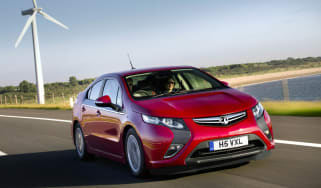 Brit firms revolutionary 175mpg hybrid takes to the road and Auto Express is behind the wheel.
Vauxhall Ampera 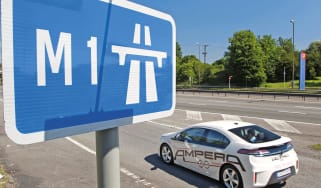 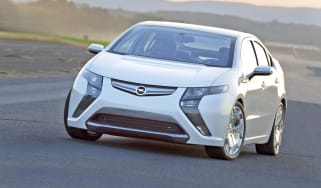 Is electric hope the future? We get exclusive access to a pre-production car to give our verdict...
Skip to HeaderSkip to Content