Is electric hope the future? We get exclusive access to a pre-production car to give our verdict... 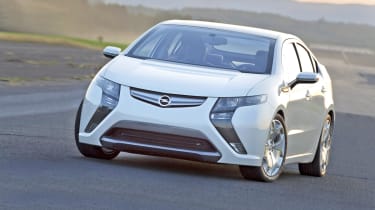 The Ampera is the billion dollar hybrid jewel in the embattled General Motors crown. The questions over its future are political. Where will it be built? How much will it cost? In the long term, though, the model has the potential to radically change the way we drive and use personal transport for better and for worse. As a snapshot of work in progress, however, our early drive in this refined and capable prototype suggests the car is mighty impressive.

This might be the only sound your next car ever makes… A gentleswishing of tyres against tarmac as a digital speedometer nudges 70mph.Under the bonnet, the 1.4-litre petrol engine sits silent and dead. Power is coming from a huge 180kg, T-shaped battery pack mounted under the floor.

Thisis the future, as shown by Vauxhall’s stunning new Ampera – which wecaught up with for this exclusive first drive. Offering the latestlithium-ion technology, it gives the Vauxhall Astra-sized model anelectric-only range of 40 miles.

The difficulties in developing the world’s first mass-produced extended range battery car should not be underestimated. First,the battery alone is said to cost in the region of £6,000 – and thenthere’s an engine which is only designed to work for brief periods.

The solution means that you might find the powerplant bursts spontaneously into life from time to time. This is to set parameters for the on-board diagnostics – and prevent the fuel becoming stale in the tank.

Whatdoes impress about this far from fully developed prototype is itsacceleration and silence. Top speed is limited to 100mph, with a0-60mph time of nine seconds, but the 111kW (148bhp) electric motorprovides sizzling kickdown performance, equivalent to that of a2.5-litre V6 Insignia.

At motorway speeds, there’s a fair bitof roar from the eco Goodyear tyres and a slight fluttering of windnoise. But the final, production-ready, highly aerodynamic Ampera willbe a great deal quieter.

Because of the unique way theVauxhall is powered, direct fuel-consumption comparisons are difficult.But it will emit about 40g/km of CO2 and have running costs aroundone-fifth of an equivalent fully loaded Vauxhall Astra.

As forthe price, the jury is still out, with GM examining whether to leasethe battery pack. As a complete package, including the battery, theAmpera would cost over £35,000 – although the UK Government is talkingabout £3,000-£5,000 buyer grants. At present, the project raises more questions than it answers. But this early drive shows the car has real promise.