Long-awaited range-extending electric car joins fleet. So does it deliver on its promise? 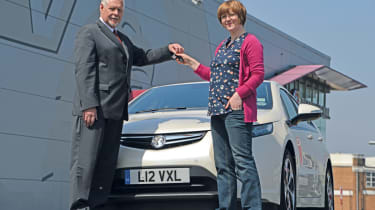 8
There are so many reasons to be excited about my new, hi-tech Vauxhall Ampera, I had to resist snatching the keys from my local dealer and making a dash for it.
As handovers go, it was frustratingly drawn-out – but for good reason, I discovered. This car is a technological marvel. The vast array of gadgets, drive options, performance monitors and fuel consumption graphics will be alien to drivers of most modern vehicles, so need some explanation to ensure you get the most out of the Vauxhall.
But above all, Ampera specialist Peter Stanley at Motorbodies in Luton, Beds, is keen to stress that this is not a hybrid. It’s a plug-in electric car that combines all the best bits of running on battery power with the reassurance of a range-extending 1.4-litre 85bhp petrol engine that kicks in to keep the batteries topped up when they run low.
The upshot is that the Ampera always drives like an electric car: silently and with instant power (there’s a muscular 370Nm of torque available from the moment you prod the throttle). The difference is, you never have to worry about finding a socket to recharge on the move.

Climb inside, and at first glance the space-age, touch-sensitive dash looks more like a prototype you’d see at the Science Museum than a working model.
But don’t be fooled into thinking its flush, button-free design isn’t functional. Brush against it accidentally, and you’re likely to reset the air-con or redirect the standard sat-nav to take you to your mother-in-law’s. I can see it’s going to take some getting used to.
Peter flicked through some of the options on the driver display screen, and highlights included the tyre pressure monitoring function, which instantly shows you the exact pressure being recorded in each tyre.
A pedestrian warning is another useful feature – especially when driving a silent car in built-up areas. The set-up emits a friendly pulsating beep when you press the end of the indicator stalk. A clever Engine Assisted Heating option will even remotely start the car and pre-heat the seats for you first thing in the morning.
I’m also looking forward to finally having a car with a fully integrated iPhone connection – so I can play my music and charge the phone on the go.
But most of all, I’m thrilled to be waving goodbye to my weekly trip to the filling station. I’ll be saying adios to crippling monthly diesel bills and switching to a virtually cash-free commute.
The Ampera promises to run for up to 50 miles on stored battery charge alone, and plugging it into the national grid and keeping it topped up will set me back just £1 on average. Add exemption from the London Congestion Charge, and the cost of my daily commuting round trip into the capital has been slashed from £25 to a mere £2.
Yet if I do want to stretch the Ampera’s legs on a weekend visit to family and friends, I can let the petrol engine keep the battery charged the whole way, filling up accordingly.
It sounds almost too good to be true – but there is one sticking point: the price. My car cost £33,995 including a £5,000 Government grant. So it’s expensive, but I guess that’s the price of progress.

“Few cars are as relaxing to drive as the Ampera. Seamless and near-silent power delivery, plus a decent ride, make its cabin an oasis of calm on even congested commutes.”James Disdale, Road test editor

“I love the look of this car and think the technology is brilliant. It’s just a pity it’s so expensive. You need to spend a lot to save money on fuel and road tax.”f1moh, via www.autoexpress.co.uk