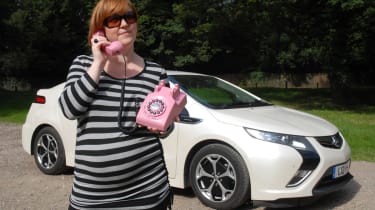 The concierge facility provided for Vauxhall Ampera owners is as close  to a Batphone as I’ll get, I reckon. As customer service goes, you don’t get much better than having a man named Trevor as your dedicated point of contact for all things Ampera.

In fact, we’ve only had the car a few months and I’ve used the MyAmpera service a number of times already. Initially, it was to refresh my memory of how some buttons worked.

I called again when the radio jammed on the traffic alert screen and I was stuck on Rubbish FM for 20 minutes. This occurred a few times, actually, and on each occasion it inexplicably fixed itself as quickly as it happened. But I’ve no doubt Trevor would have immediately hauled me and the car into my local Ampera dealer if it hadn’t.

We’ve enjoyed a couple of months’ hassle-free driving since then, yet Trevor has still called and left messages several times asking if everything’s still okay with the car. I’ve had boyfriends who were less attentive.

But a recent problem with the charger prompted me to finally call him back. After I persuaded Vauxhall to lend us one charger for the office and one for the garage at home, plugging the car in couldn’t be easier. So when the home charger suddenly stopped working, I was keen to get it sorted as soon as possible.

Trevor asked lots of questions to identify whether the car, the charger or the user was at fault. Had it been the car, then he’d have booked it in for a check-up on the spot. As it turned out, all the evidence pointed to  a faulty charger, so Trevor arranged for another one to be ordered. Simple.

This personal touch and on-call expertise, as well as the back-up petrol engine, makes the Ampera unique among electric cars by eliminating the normal challenges and limitations that come with owning one.

The Vauxhall also attracts a huge amount of attention from passers-by. I’m regularly stopped by curious fellow motorists and quizzed about its handling and practicality.

But at first, I thought these drivers were intent on reprimanding me for the high volume at which I was playing music through the car’s brilliant Bose stereo system. The touchscreen function pad is fiddly, but once you’ve selected the station you want – or better still, plugged in your iPod to play your favourite tracks – the sound quality is excellent.

Most of the attention has thankfully concerned the car’s clever technology. For example, I recently found myself in traffic alongside a classic car, and was amused to realise that its driver and I were ogling each other’s motors. I was admiring the clean-cut glamour of his car’s stylish body and chrome trim, while he was clearly explaining the Ampera’s technology to his passenger.

Unfortunately, the car sometimes attracts unwanted attention, too – usually when I’ve underestimated just how slowly I need to approach bumps in the road. The Vauxhall’s front spoiler is ludicrously low, meaning anything other than creeping over speed bumps results in a nasty, head-turning crunching sound as it scrapes the tarmac.

At other times, the near-silent electric motor makes driving through towns a test of vigilance, as I brace myself for all the pedestrians who will inevitably walk out in front of the Ampera without looking.

Thankfully, there’s a dedicated horn designed to give them a gentle auditory signal that I’m heading towards them. As gadgets go, it may not quite be the stuff of caped superheroes – but it’s not far off.

“If you want to unwind after a long day, few cars can make your commute as restful as the Ampera.”James Disdale, Road test editor

“Makes sense for company users, not private buyers. I’d have to own it for 10 years to justify the extra cost over a diesel car.”Wayne Walton, via www.autoexpress.co.uk