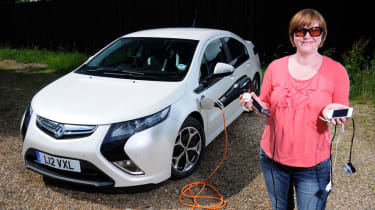 Making sure you pack a European plug adaptor for your hairdryer and mobile phone is second nature to any girl travelling abroad. But this was the first road trip when I needed one for my car.

Such is the simplicity of the charging needs of my new Vauxhall Ampera, though, that plugging it into the national grid in France really is as straightforward as adapting any everyday electrical item you’ve brought from home.

When we arrived, we dug out the European charger and adaptor kit – £50 from Vauxhall dealers – and plugged it into a socket in the lounge of our holiday gite. Six hours and a siesta later, we were all fired up, ready to explore the surrounding area – fuel-free...

In a country famed for its workhorse attitude to cars, though, the Ampera looked ludicrously out of place as its futuristic frame glided silently through the French countryside. And I couldn’t help but worry how the local garages would cope if we were to break down (thankfully we didn’t).

These little back street workshops looked like they got by with little more than a spanner and the greasy technicians were likely to be more comfortable tinkering with a tractor than our range-extending electric car.

We were reminded how modest that range-extending petrol engine really was on the long haul back to Dover. The petrol tank’s meagre 35-litre capacity means you can’t travel as far between fill-ups as in a traditional diesel model.

And in the early hours of the morning on the last leg of our 600-mile trip, we found the sat-nav had been wrong when it confidently flagged up a number of petrol stations ahead. We’d dismissed the first one, as we had nearly one-third of a tank of petrol left, but were then left running on fumes as we crawled to the nearest services selling fuel.

It wasn’t the first time the navigation system had let us down. At a few crucial crossroads during our holiday, it just froze and stopped routing altogether, while on other occasions it simply misdirected us. Only when common sense kicked in, and we reverted to the atlas, did we get back on course.

Back home, an added frustration with the sat-nav is that it only offers a partial postcode search, which means it’s not always possible to navigate door to door.

Those niggles aside, the Ampera coped extremely well with our marathon journey, comfortably accommodating our little family and a mountain of luggage.

And while the low roofline makes loading my two-year-old daughter into her child seat tricky, once you’re on the move, the car is impeccably refined – and ideal for long motorway trips. When running on battery power it’s almost silent, but even when the petrol engine kicks in there’s barely any noise.

Of course, efficiency is the car’s main redeeming feature. Even taking into account the huge distances we covered in France with the petrol generator running, the Ampera’s average is an impressive 70.1mpg so far – meaning our holiday fuel bills were a fraction of their usual size. And anything that frees up cash to spend on creme brulee gets my vote.

“The Ampera isn’t fun to drive in the traditional sense, but there’s plenty of enjoyment to be had in maximising the car’s range in battery mode.”Owen Mildenhall, Senior road tester

“My Ampera cost more to buy than an equivalent diesel-powered premium saloon, but the savings I’ve made on company car tax and fuel bills have been worth the extra outlay.”Badger56, via www.autoexpress.co.uk