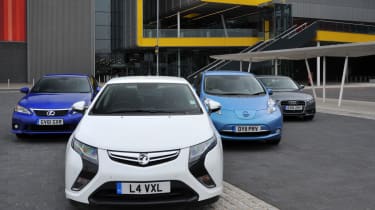 The eco credentials of an electric car with the range of a petrol model... It sounds too good to be true, but that’s how Vauxhall bills its new Ampera. It’s the first range-extender to go on sale in the UK.
The Ampera’s 1.4-litre petrol engine is only there to maintain the charge of its batteries once they’ve run flat, and the car is capable of up to 35 miles of zero-emission running before the engine is even needed.
Three varied rivals will put the hi-tech Vauxhall to the test as we set out on a 40-mile commute through London as well as our usual rounds of tests. The Nissan Leaf represents all-electric cars and matches the Ampera in two areas: it qualifies for a £5,000 Government grant and needs regular recharging from the mains to make the most of its powertrain.
Our next contender mixes excellent efficiency with the freedom of petrol power. The Lexus CT 200h is a hybrid, so its petrol engine drives the front wheels most of the time – it uses electric power at low speed and for short distances only.

The final car in our quartet is the Audi A4. The recently revised saloon is highly efficient in TDIe form. But will it be able to meet the challenge of its electrically assisted rivals?

Expectations were high for the Vauxhall Ampera – and it doesn’t disappoint. For most drivers, the novel drivetrain really does deliver the best of both worlds.Provided you can plug it in to charge every night, the Vauxhall is a cheap-to-run and relaxing commuter car, while its efficient petrol generator means it can tackle longer journeys that would leave a normal electric car stranded.

The Audi takes second place and proves there’s life in the traditional diesel engine yet. The A4 is beautifully built, very spacious, good to drive and makes the most sense if you frequently cover long distances.

The Lexus takes the last podium spot. It looks ungainly, but there’s no range anxiety and it hit nearly 50mpg on our test commute.

So the Nissan brings up the rear. If you only use it for short trips, it’s a great choice. But the restricted range really holds it back.

The Ampera could set the trend for a raft of range-extending models. Its electric motor makes it a cheap choice for daily commuting – especially for company car drivers. Yes, it’s costly, but it is much better kitted out than the A4, and cheaper versions are also available.

The Audi sets a high efficiency standard for diesel-engined saloons. Low CO2 emissions and decent fuel economy mean that private buyers and company users will save. The A4 is also well built and roomy, plus it boasts the best and most entertaining driving dynamics here.

While it’s not range-limited like the Leaf, the Lexus struggles to match the all-round talents of the Ampera and A4. Its hybrid drivetrain doesn’t deliver the expected fuel economy returns. But lesser models will be cheaper (prices start at £23,750) and more comfortable than the F Sport.

As a commuting car, the Nissan makes a lot of sense. Low running costs, light controls and a responsive electric motor all work in its favour. The Leaf is also well equipped and features a bright and airy cabin. But there’s no escaping its very limited driving range in this company.