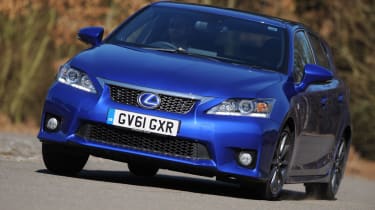 8
Lexus has been leading the way in hi-tech eco-friendly motoring for nearly a decade. For its green models, the company favours petrol-electric hybrid drivetrains over traditional diesel engines – and it has been reaping the rewards of this strategy over the last 12 months.
European sales are up by 40 per cent, with the entry-level CT 200h accounting for half of all the cars leaving its showrooms. However, it’s immediately clear that the compact hybrid’s success isn’t down its styling: no matter what angle you view it from, the CT 200h looks ungainly and awkward. Even the graphite grey 17-inch alloys and racy bodykit of the new-for-2012 F Sport model we tested fail to boost the car’s limited visual appeal.
Things improve inside, where you’ll find a smartly designed dashboard and decent build quality. The CT can’t match the Audi for top-notch, upmarket finish, but it feels classier than the Nissan and Vauxhall. The plastics look and feel expensive, while the switchgear operates precisely. Standard leather trim adds to the quality feel.
Sadly, the Lexus’ interior is let down by a lack of space. The CT 200h is the shortest car here, and it shows inside. There’s much less legroom than in the Audi, while the shallow side windows give the cabin a claustrophobic feel. At least the 375-litre boot capacity is bigger than in the Leaf and Ampera, while the hatchback tailgate improves versatility.

On the move, the Lexus struggles to keep up with the competition. It trailed the Audi by 1.7 seconds in the sprint from 0-60mph, needing a very leisurely 11.1 seconds. What’s more, if you use all the performance on offer the 1.8-litre petrol engine emits a very intrusive and thrashy roar.
Away from the track, the CVT gearbox makes the CT 200h feel unresponsive. Even the Sport mode fails to improve matters – although it does transform the charge gauge into a rev counter, which is a neat touch.
Like the Leaf and Ampera, the Lexus has grabby brakes that make it hard to stop smoothly. It also struggles through a series of corners, as there’s less front-end grip than rivals and the steering lacks any real feedback. And while the F Sport’s stiffer suspension set-up reduces body roll, it also gives a crashy, uncomfortable ride.
To get the best out of the Lexus, you need to head into town, where its hybrid drivetrain can run in near-silent electric mode for just over a mile. It was this neat function that helped the CT 200h return an impressive 49.6mpg on our commute. Sadly, economy slumped to a disappointing 36.1mpg over the duration of our test – although this figure does include all of our performance runs.
It’s not all bad news, however. Emissions of only 94g/km make the Lexus a cheaper company car choice than the Audi, while it also boasts the strongest predicted residual values of our quartet. The trouble is, those positives on their own are unlikely to be enough to secure victory for the CT 200h in this very tough encounter.

Chart position: 3WHY: With a 1.8-litre petrol engine, electric motor, CVT gearbox and 94g/km emissions, the Lexus offers a lot. But does it add up to the sum of its parts?