With gentle driving, we’ve achieved up to 76mpg in our CT 200h 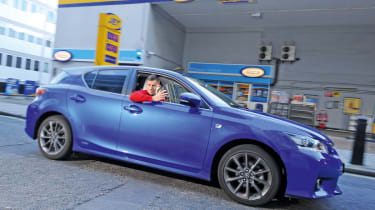 I’ve been dodging fuel stations recently. Our Lexus CT 200h has a modest 45-litre fuel tank, but I’ve managed to achieve an amazing fuel economy figure of 76mpg on my 11-mile commute to work – and that means you could potentially go 903 miles between fill-ups.

I say ‘could’, because unless you drive in a way to make the most out of the hybrid system (that’s tediously slowly, by the way), you won’t get near that. But maximising the car’s economy has become a bit of a sport for me over the past six months.

With this in mind, you may wonder why the Lexus’ overall economy is 53mpg – which is 16mpg shy of the official figure and 5mpg down on its last update.

Well, most of the CT’s miles have been clocked up by other members of the Auto Express team, as I spend much of my time filming other cars for our sister website, CarBuyer.co.uk. And my colleagues don’t seem to have the patience to eke the best economy from the Lexus. Shame on them.

Still, apart from the far more expensive Vauxhall Ampera, the CT 200h is the most economical car on our fleet. And while some diesels get close, they will cost you more in fuel and company car tax. In fact, the Lexus has turned me from hybrid sceptic to hybrid evangelist.

It’s also changed my opinion about something else: the shadow-effect wheels might be cool, but they soon look tatty if you kerb them, as the shiny scratches really stand out next to the contrasting dark paint.

I discovered this when someone weaved in front of me on a dual carriageway, and I swerved to avoid a collision, hitting the kerb of the central reservation. At 40mph.

I’ll get the wheel fixed for a future report, but in the meantime I have a challenge for you: try to beat my personal best economy of 76mpg in the CT. Tweet me at @mat_watson with a picture of your trip computer as proof.

“It’s possible to coax some remarkable fuel economy from the Lexus, but it’s hard work. For most people, a diesel will be a better bet.”Owen Mildenhall, Senior road tester

“The Lexus will be my next car. I reckon there’s simply no better-quality car available in this class. It’s light years ahead of the BMW 1 Series.”Netherlands, via www.autoexpress.co.uk