Hybrid Lexus CT 200h hatchback gets a raft of upgrades, and is better to drive as a result 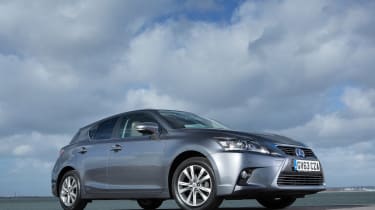 It’s easy to dismiss the Lexus CT 200h as dull, but for customers with no interest in driving fast, it’s ideal. Quality, refinement and ride are all improved, while the styling is fresher all round. Sub-100g/km emissions ensure it costs pennies to run for business users and Lexus has sweetened the private-buy deal, too – slashing up to £1,500 from the old model’s price.

The facelifted 2014 version of the Lexus CT 200h has arrived in the UK, and the updates are deeper than meets the eye. Rather than simply grafting on the new family face, Lexus has listened closely to its customers’ comments and applied a raft of smart changes to the hybrid hatchback.

Although the original CT 200h was never a sporty car to drive, Lexus still decided to fit it with firm suspension and pretend that it was. Fortunately, this time around the company has stiffened the body and softened off the spring and damper rates. The CT 200h is still not the comfiest in the class – a Volkswagen Golf rides better, for instance – but bumpy surfaces are no longer tortuous and it wafts along brilliantly on smooth roads.

Lexus claims refinement has been improved in a further 94 areas, and it seems to have worked. An EV mode lets you travel up to 1.2 miles in utter silence, and even when the petrol engine kicks in it’s only a whisper in the background.

Drive the CT 200h on part-throttle and it makes a lot of sense. The electric motor fills in the torque gap when setting off from a standstill, so the Lexus feels nippy in traffic. Get it out on to the open road, though, and things start to fall apart.

The CVT gearbox is still ever-present, but while it gives a more linear throttle response and doesn’t whine quite as much as it did, it means full-throttle performance is average at best.

The steering is nicely weighted, yet you can feel the heavy batteries in every corner. Luckily, to keep you entertained, the interior has some interesting new features.

A wafer-thin 4.2-inch screen looks fantastic, and with the navigation system (standard-fit on the Advance-spec car) you get a new BMW-style rotary dial, rather than the fiddly mouse controller. A new gear selector and steering wheel taken from the Lexus IS ensure the cabin feel is right up there with that of the class leaders.