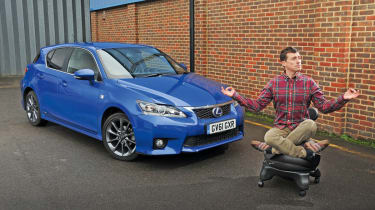 If you have a bad back, you can forget about stupid new-age posture-correcting chairs – I have the perfect solution. Simply visit your local Lexus parts retailer, buy a replacement seat for a CT 200h and sit on that. In my experience, it will be just as good for your spine without making you look like a Pilates plonker.

I’m not kidding. Over the past 10 years, I’ve driven almost every car going, from luxury limousines with massaging hide-clad thrones to supercars with body-hugging carbon fibre buckets. But so far, no car seat I’ve tried has fitted me as well those in our Lexus.

That’s really saying something, because I’ve run two of the Volvos we’ve had on our fleet in the past, and its cars are legendary among the posturely challenged for their comfortable seats. And as I’ve had the best seats in the house, the Lexus has grown on me over the past year far more than I thought it would.

If you think about it, unless you live next to the Nurburgring, a car’s seats are more important than its outright performance or its handling on the limit. Yet drivers often overlook them when deciding what to buy.

That’s not too surprising, though. On a short test drive, it’s easy to judge if a new car is fast and handles well. You’re not going to know whether, six months down the line, the seats will have you hunched over like Notre Dame’s most famous bell ringer.

Maybe this is one of the reasons Lexus struggles to compete with its German rivals in terms of market share – comfy seats don’t quite tug at the heartstrings, and in turn the purse strings, when you’re standing in a showroom ready to splash the cash.

To be fair, the CT tries its best to attract potential buyers through more obvious means. But after a few moments behind the wheel, it’s clear the aggressive looks, rock-hard suspension and, in the case of our F Sport model, the name itself, flatter to deceive. Under the skin, the running gear is lifted straight from the Toyota Prius – a car not exactly known for being fun to drive.

That’s why, whenever I venture away from the CT’s natural city centre habitat, I always wish I was driving something else. Anything else (apart from a Prius, of course). With its lifeless controls and whiney gearbox, the Lexus saps all the joy out of even the most perfect twisty B-road. Plus, these country jaunts have had an impact on economy. While the CT achieves 53mpg in town thanks to its electric running, out in the sticks this drops to 48.1mpg as the petrol motor does more work.

This lack of excitement has meant nobody else at Auto Express has a burning desire to drive it. Despite the premium badge, and the £28,000 price tag to match, plus the fact the car is exempt from the London Congestion Charge, there’s not exactly a queue of people desperate for the keys.

Still, this means it’s always there for me if I need a car. And whether I’ve just been testing a limousine or a supercar, I’m never unhappy about climbing aboard the CT, as I know I’ll always be sitting comfortably.

“I wish Lexus would do more with its F Sport models. While our CT looks sharp, it can’t back it up with any semblance of an entertaining drive.”Dean Gibson, Deputy road test editor

“I’d love to have this car, but not in blue – it looks awesome in white.”martijnroth, via YouTube