Do a series of tweaks to the premium Lexus CT 200h hybrid hatch go far enough? 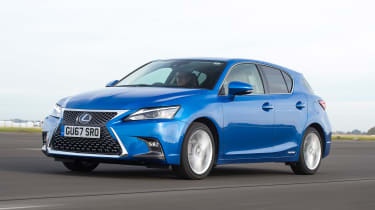 Six years after its launch, the CT 200h is feeling its age. Modern rivals cost less to buy, while also offering a more rewarding driving experience, lower emissions and a greater all-electric range. The Lexus feels solidly built, but cars such as the VW Golf GTE offer a more user-friendly interface, with loads more room in the back. Ultimately, as the electric market continues its charge, the CT is more flawed than ever.

This week, Lexus boss Yoshihiro Sawa told Auto Express that the future of his brand’s smallest car is in doubt. The popularity of crossovers and SUVs means sales of the CT 200h have suffered – despite its fuel-sipping petrol-electric powertrain.

In order to maintain momentum before the hybrid hatch is replaced (or axed), Lexus has carried out some tweaks. Chief among these is a new trim structure, alongside revised bumpers, fresh lights and a different grille. Higher-spec SE trim replaces entry-level S cars, while Luxury, F Sport and Premier models complete the range. All come with alloy wheels and a seven-inch display, and our expensive top-spec model adds a Mark Levinson stereo and sat-nav.

Based on the previous-generation Toyota Prius, the CT is available with just one engine and box combination. It’s a shame Lexus hasn’t seen fit to move the hatch on to the latest Prius architecture, as the newer set-up improves exponentially on its predecessor. 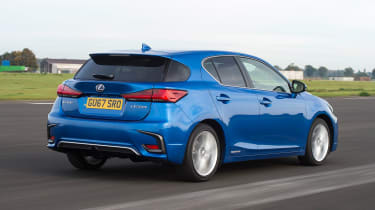 The 200h feels lazy under hard acceleration, and the CVT box sends revs skyward if you floor the throttle. The steering is lifeless, too, and putting the car in Sport does little to improve response.

Yet that’s not what the Lexus CT 200h is about. Take things easy and it shows its strengths as an executive hatch. In town you can run around for a mile or so in EV mode, and the engine is virtually inaudible on the motorway. That might be due to our car’s large wheels and pronounced tyre noise, however. 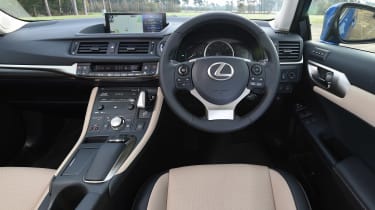 The cabin design is a bit of a letdown, retaining the original confusing dashboard and mouse-like infotainment controller, mismatched materials and grainy graphics.

There’s no avoiding the fact that modern rivals – many of which can be charged from a mains socket – offer a more complete package. The Volkswagen Golf GTE, for example, is immeasurably better to drive and will do a claimed 31 miles on electric power. Higher CO2 emissions make the Lexus a more costly company car, while the VW’s well built interior is more user friendly as well.