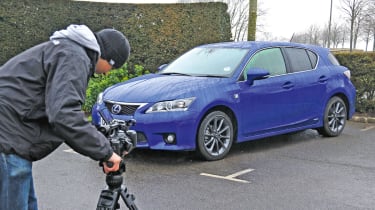 A lot can happen in 12 months, and it did to our Lexus CT 200h. In fact, it had a bit of a hard life in my custody because as head of motoring video I’ve been using it as a workhorse, lugging loads of camera gear up and down the country.

Still, this gave me plenty of time to really see what this alternative take on a premium small hatch is like to live with. And this is what I’ve learned.

If you drive mainly in town, and at a very sedate pace, you can not only achieve Lexus’ claimed economy figure, but beat it.

I did almost 72mpg on one run into work. However, if you drive any distance on the motorway, your overall average will tumble as the hybrid system isn’t as efficient as a diesel at sustained high speed. This is a shame as the CT is very comfy on long motorway journeys – its seats are among the best I’ve ever sat in.

Sadly, the car isn’t so cosseting in town as the needlessly hard suspension of our F Sport model will shake your fillings loose if you so much as go near a pothole or bump.

You probably won’t be going anywhere very quickly if you rely on the optional sat-nav system, though. It seems to choose the most inappropriate routes, despite claiming to incorporate traffic avoidance technology.

Plus, if you only have the postcode of your destination, the dated four-digit entry will only let you get to within a 500-metre radius. I used the TomTom app on my iPhone instead.

Still, I will miss the CT’s infotainment interface – give me the joystick control over BMW’s iDrive wheel any day. It’s just a pity Lexus made the tech worse when it updated it for the new GS. So much for progress.

And so much for our car’s F Sport badging. The CT can sap all the fun out of even the most perfect twisty road, thanks to its whiney and unresponsive CVT gearbox, plus steering that’s so numb it may as well be connected to a Sony PlayStation games console rather than the front wheels.

But I certainly can’t complain about the practicality. The boot is still a decent size, even though the batteries are stored beneath it, and with no load lip and seats that fold flat, I managed to fit in some decking.

Not so clever are the ‘shadow’ wheels on our F Sport. They sit slightly proud of the tyres, and are not only easily kerbed, but hard to fix. Turns out Lexus has no specific paint code for the dark shade, so if you have one repaired, you’ll need to get all the others resprayed to match. Brilliant.

Still, if there’s one thing I’ve learned about the CT 200h, it’s this: it grows on you. It would never have made my premium hatch shopping list, yet now it’s gone I will definitely miss it.

“I like the styling, so I was prepared to give the Lexus the benefit of the doubt before I took the wheel. But I agree with Mat; the driving experience falls well short of the class’s best.”Luke Madden, Deputy news editor

“Am I the only one who thinks £25k-plus for what’s essentially a glorified Toyota Prius is just nuts?”Hassan, via www.autoexpress.co.uk