When it comes to customer service, Lexus is in a class of its own 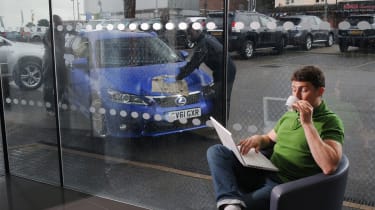 My sceptical colleagues said I was only doing it because I’m too lazy to clean the car myself. But that’s not true at all. It was actually a piece of proper investigative journalism – to go undercover and test the quality of service at a Lexus dealership.

It was just a lucky coincidence that when I collected GV61 GXR from Jemca Lexus Edgware Road in London, it had been so thoroughly valeted it looked like I’d actually been given a brand new car. I’d almost forgotten how striking the optional Ultra Blue paint was underneath four months’ worth of grime.

Now I’ll admit I suspected the car might be cleaned. After all, Lexus dealers have come top in our Driver Power customer satisfaction survey every year since it began back in 2002. Thing is, the cars also score consistently well for reliability, so we were as likely to need to visit a dealer during our time with the CT as I was to break out the bucket and sponge to wash it myself.

But one day the car made a strange electrical groaning noise, a bit like the death rattle of a washing machine, when I tried to start it up. The sound only lasted a few seconds and has never returned. And while it didn’t worry me, I’m sure there would be some concerned owners out there who would get their car checked ‘just in case’. So I called Lexus Edgware Road, asking if it could investigate.

Despite the vague nature of the fault, the dealer bent over backwards to get the car in as soon as possible. Sadly, I was told the short notice meant I wouldn’t be able to enjoy the home collection service – I’d have to make do with a new GS courtesy car instead. Poor me.

Things got even better when I arrived at the showroom. The receptionist immediately offered me a cup of tea which I drank, feet up, while watching Loose Women on their TV and surfing the Internet on the free customer WiFi. And had I wanted to do this in private, there were a couple of quiet rooms available upstairs for VIPs, although I was told that really all Lexus owners are considered VIPs.

Anyway, I didn’t have to wait long for the service executive to arrive, fill in a few forms and then swap my CT keys for the GS. The only stipulation of the loan was that I return the car with the same amount of fuel as when I took it – which I duly forgot to do.

Yet no one at the dealership seemed to mind about this, nor about the fact it would not be getting a single penny from Lexus GB’s warranty scheme for the time spent on the CT, because no fault was found.

In fact, the only time anyone looked shocked was when I revealed my true identity and the reason for my visit. A member of staff joked: “Oh, a mystery shopper. And I thought you were just trying to get your car cleaned for free.” Clearly, they know me too well...

“Our Driver Power survey proves Mat’s experience was no fluke. Now all Lexus needs to do is build cars that are as brilliant as its dealers.”James Disdale, Road test editor

“I can see why the CT 200h is often overlooked, but excellent quality, low running costs and great dealer service make it hugely desirable.” poleposition5, via www.autoexpress.co.uk