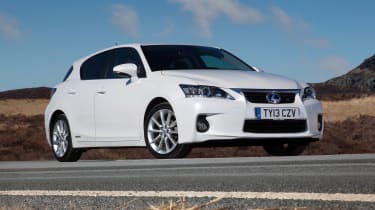 Lexus has enjoyed reasonable success so far in the UK with its smallest model, selling around 30,000 examples of the CT, which was initially billed as “the world’s first full hybrid luxury compact car”. We ran an F Sport for 12 months, but weren’t convinced by it. While the seats were incredibly comfortable and the economy potentially superb (we achieved up to 76mpg on cross-country runs), we were less enamoured with the whiny transmission, numb steering and poor motorway fuel consumption. Our Driver Power satisfaction surveys show, however, that owners who have lived with their CTs for much longer tend to love them because they’re so reliable and the dealers so good. In typical Lexus style, the CT is only okay to drive, but it’s incredibly easy to own.

Believe it or not, this month marks the eighth anniversary of Lexus introducing its CT 200h to UK showrooms. The baby Lexus was a unique proposition when it arrived, offering hybrid technology with a touch of luxury in a compact hatchback bodyshell.

In effect it was a rebodied Toyota Prius, although the CT didn’t initially seem worthy of the Lexus badge, due to a disappointing cabin. Yet after many updates, it now feels like the premium car it’s supposed to be.

The problem for Lexus is that some very capable rivals have been launched since the CT arrived, and these have given it a hard time. They struggle to compete with this model’s reliability, though; almost nothing can match the Lexus for this. 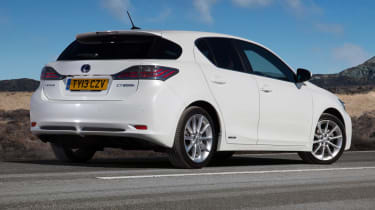 The Lexus CT was one of the earliest hybrids on sale, and different versions can be referred to by their CO2 emissions. The 94g/km CT 200h arrived in February 2011 in SE-I, SE-L and SE-L Premier forms, with the racier F Sport appearing in January 2012.

A year later, the high-spec Advance and entry-level 87g/km S were introduced, with the trim hierarchy switching to SE, Luxury and Premier. In March 2014, a facelifted CT 200h brought styling changes, improved dynamics and extra standard equipment; the CO2 emissions for the CT 200h S were also cut to 82g/km. The Advance Plus from spring 2015 featured sat-nav, metallic paint and a sunroof; the Sport of September 2015 brought a more dynamic design.

All CTs come with a continuously variable transmission and a hybrid powertrain, at the heart of which is a 1.8-litre petrol engine. There’s no plug-in option and the only body style is a five-door hatchback, so all CTs have much the same driving characteristics.

Lexus has revised the range so many times that trying to explain the equipment fitted to all of the trim grades would fill this magazine. Even the earliest entry-level models have alloy wheels, Bluetooth, dual-zone climate control and automatic wipers, while mid-range CTs generally come with leather trim and heated front seats.

Alternatives to the Lexus CT

The Toyota Prius is the CT’s closest rival, in that it’s mechanically identical and brilliantly reliable. It’s more practical, too, plus since 2012 there’s been a Plug-in version, albeit initially with a mere 14-mile EV-only range.

Rival premium plug-in hybrids include the Volkswagen Golf GTE and Audi A3 e-tron, both of which are accomplished. Neither is plentiful, however, and prices are steep as a result. Those after a conventional (non-plug-in) hybrid could consider the petrol-electric version of the Toyota C-HR, although this is a newer model, so used prices aren’t as low as they can be for the CT. 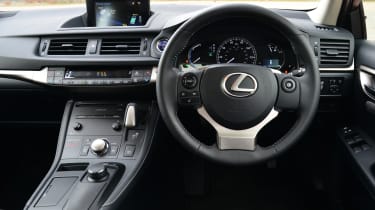 The CT’s official fuel economy figure is 68.9mpg. Most owners seem to achieve 50-55mpg during everyday driving, however.

The F Sport model’s ‘Shadow’ alloys are kerbed easily. And repairs aren’t straightforward, because they have their own unique colour.

Rubber seems to last forever on the CT; many owners have gone beyond the 40,000-mile mark before needing to fit replacements.

Instead of providing a spare wheel of any kind, the Lexus CT comes with a ‘tyre-mobility kit’. However, some overseas versions did offer a space-saver rim instead.

No CT is sparsely equipped, but the earliest cars featured some materials that weren’t worthy of the brand. While later models are better in this respect, the key thing for us is the comfortable seats; they’re perfect even for long drives. Cabin and load space are good, despite having to accommodate the hybrid drivetrain. The CT has a 375-litre boot with the seats up, or 985 litres when they’re folded. 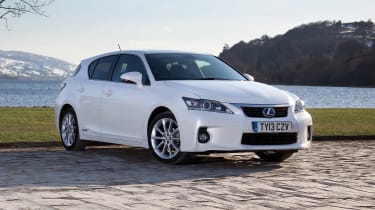 The CT 200h follows the same service schedule as the Toyota Prius Mk3, so maintenance is required every 12 months or 10,000 miles. Checks alternate between Intermediate (which is little more than an oil and filter change plus a visual inspection) and Full. These two services are priced at £165 and £295 respectively. At 60,000 miles a bigger service is required (£475), then the biggest of all comes at 100,000 miles, costing £545.

There’s no timing belt to replace because the CT’s engine is chain-driven. Fresh brake fluid is needed every two years, and the coolant has to be replaced every 10 years or 100,000 miles, but the costs of carrying out these things are built into the servicing.

For an eight-year-old car, the CT impressed when it came 30th in the Driver Power 2017 new car satisfaction survey, but even better was its fourth place in that year’s used poll. Top-three ratings for safety, reliability, running costs and the powertrain were the highlights. Most of the other areas, such as exterior finish, comfort and the driving experience, were also in the top 10.