Lexus' new compact hybrid aims to shake up compact exec class, and we see if it delivers 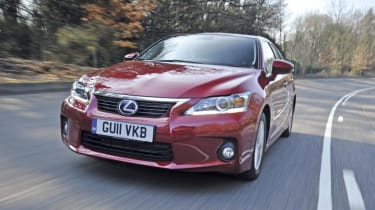 You have to admire Lexus for its commitment to hybrid technology – and it’s hard to argue against the logic. Company buyers will find the CT200h appealing thanks to its incredibly low CO2 emissions and prestige badge. The financial savings do come at a price, though, as the cabin lacks space and premium quality. The driving experience is also unrewarding, and the styling leaves a lot to be desired. The technologically similar Toyota Prius is bigger and cheaper.

Bosses at Lexus are planning a sales drive in 2012, and the new CT 200h will lead the way. It’s designed to challenge established rivals such as the Audi A3 and BMW 1-Series in the growing compact executive segment – so has it got what it takes?

In line with the firm’s hybrid-only philosophy, the smallest and lightest ever Lexus uses the same petrol-electric powertrain as its Toyota Prius cousin. But while its engine is advanced, the CT 200h looks far from cutting edge.

With a busy mix of creases at the front, a wraparound rear screen and wheels that don’t fill the arches, the car has a confused design. The result looks like a cross between a Subaru Impreza and a Lexus IS, which is hardly a ringing endorsement.

The CT 200h will be available in three trim levels, rising from the £23,485 SE-I to the SE-L Premier, at £30,635. We drove the mid-range SE-L model, which costs £25,200 and features climate control, leather trim, heated front seats and Bluetooth connectivity as standard.

Yet while the interior is well equipped, its busy design doesn’t have the same quality feel as the firm’s larger models. With lots of buttons, plasticky leather and shiny plastic trim, the CT 200h is beaten by a VW Golf for premium feel inside.

Rear passengers are treated to plenty of head and legroom, but the tailgate lifts to reveal a cramped boot. Young families would struggle to live with such a tiny load area – even though an underfloor cubby boosts space, they’d be better off with a Prius.

The Toyota’s hybrid drivetrain lies at the heart of the Lexus, and you can’t argue with the numbers. Emissions of 94g/km make it an attractive company car choice – if you don’t mind sacrificing driver enjoyment. Performance is poor, with the CVT gearbox and 1.8-litre petrol engine struggling under hard acceleration.

The dynamics are compromised by a firm ride, numb steering and a lack of front-end grip. Plus, the regenerative brakes aren’t very smooth, either. Instead, any fun comes from making the most of the car’s economy.

By timing the use of its all-electric mode, you can glide silently through the most congested parts of your journey without troubling the fuel gauge. As petrol prices continue to rise, that could be enough to assure the CT 200h’s success.

Rival: Audi A3 TDI e CLEAN diesel engine technology cuts emissions to 109g/km for the A3 Sportback S tronic. It’s more practical and stylish than the Lexus, and better to drive. Prices start at £20,930.