It's no hot hatch, but the facelifted VW Golf GTE will be very cheap to run if your lifestyle suits it 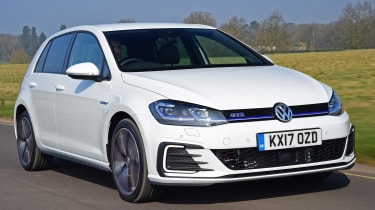 The recent updates to the Golf range do little to change our impression of the GTE. The extra cabin tech is beneficial if a little tricky to use, while the same-again styling is unlikely to disappoint. The GTE's mixed driving experience means it doesn't entertain, but it still impresses around town. If your lifestyle allows, it could be fantastically cheap to run.

Of the circa 200,000 cars VW sold in the UK last year, nearly 77,000 were Golfs. Despite the rise of the SUV, it’s still the brand’s most popular model here. Almost all were sold with straightforward petrol or diesel engines, with only a small fraction of them going for electric or ­– like in the Golf GTE – hybrid power.

It might not be a huge seller, but VW’s UK team are hoping the GTE will rise to around 10 per cent of total Golf sales by the end of this year. The government isn’t going to make that easy, though: from April, the GTE (like most plug-in hybrids) will go from being tax exempt, to costing £130 annually after the first year. 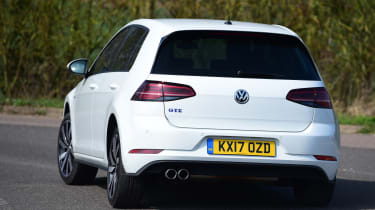 Still, a company car user would still benefit from lower rates – and tax avoidance isn’t the only reason to buy the hybrid Golf. Many will be swayed by the promise of up to 156mpg, 0-62mph in 7.6 seconds, and a 20-mile all-electric range.

Like other 2017 Golfs most of the updates are visual, and even those are verging on unnoticeable. There are new LED headlights with the familiar blue strip neatly integrated into the lenses, as well as revised bumpers front and rear and lightly tweaked tail-lamps. VW claims the design changes are slight so that owners of the current model don’t feel short-changed, but that means there’s little incentive for them to trade-up, either. 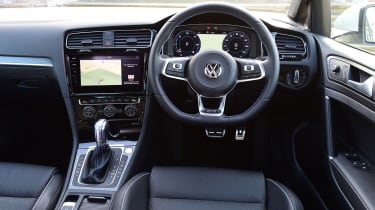 Thankfully, there’s more to talk about inside. As standard, the GTE now comes with an eight-inch sat-nav and infotainment system (two inches larger than before), but our test car came with the new £1,325 Discover Pro system. It gets a 9.2-inch screen, voice control, a 64GB hard drive and three year’s subscription to VW’s ‘Car Net’ online services. It’s also the brand’s first model to come fitted with gesture control, with a left or right swipe of the hand allowing you to change the radio station, for example.

It’s a bit of a gimmick to be honest, and not a very impressive one at that. The gesture functionality is limited and more often than not it doesn’t actually respond to your input, so you’re far better off just prodding the screen. The removal of the physical buttons around the side of the screen is a backward step for ergonomics, too, while the glossy finish shows up fingerprints. At least the hardware is quick to operate and the display looks far crisper and clearer than ever before.

VW also throws in the brand’s ‘Active Info Display’ digital instrument cluster as standard. It’s not as tidy to look at as Audi’s Virtual Cockpit, which is a shame, but it’s as slick and useful as ever. It can also flick instantly between revs and battery power depending on which power source you’re using. 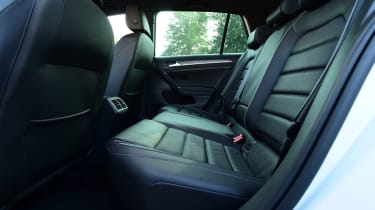 The GTE’s powertrain is unchanged, meaning you get a 1.4-litre turbo petrol engine mated to an electric motor and a combined system output of 201bhp. There are various modes to allow you to save, use or charge the batteries, as before. It’s superb around town, pulling away silently from the lights with a wad of on-demand electric torque making it feel nippy in a straight line.

However, it isn’t quite as convincing on the open road. As before, the GTE seems to hold on to gears for way too long, and it doesn’t deliver anything like the rev-happy flexibility or sporty sound of a GTI. The extra weight of the batteries blunts responses in the corners, too, and there's more road noise and a less composed ride than in a regular Golf.

Accept the GTE isn’t a true hot hatch, however, and it’s easier to overlook its dynamic foibles. Drop the pace a little and it’s a capable, swift family car that has the potential to be extremely cheap to run.