Can electric car pioneer stand up against varied rivals? 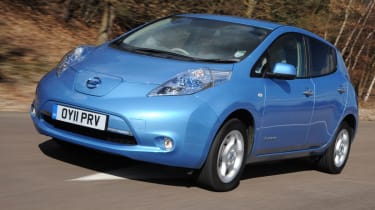 8
The original electric car has been on sale for over a year now, but it’s still our class leader – and the car the Ampera must beat.
In our first ever all-electric road test in Issue 1,206, the Leaf easily saw off the Renault Fluence, but the Ampera’s innovative new drivetrain represents a far bigger challenge.
In profile the two cars could hardly look more different, as the Vauxhall’s saloon body and aggressive aerodynamic styling are in stark contrast to the Leaf’s gently flowing curves. Both are very distinctive compared to conventional rivals like the A4, but a glance inside proves that Vauxhall and Nissan
have taken very different approaches.
While both cars feature attractive graphics for displaying important information such as remaining range and battery status, the Leaf’s light and airy cabin is designed to be as relaxing as possible. An upright driving position and large windscreen mean that forward visibility is better than in the Vauxhall, but the cream-coloured surfaces and fabrics aren’t as durable as the Ampera’s darker finishes and the brittle plastics lack the quality found in the Lexus and Audi.
On the plus side, there’s plenty of standard equipment: the Nissan comes fully loaded with gadgets like sat-nav, a reversing camera, Bluetooth and LED headlights – most of which will cost you extra in the other cars. That list is even more impressive when you consider this is the cheapest option in this group, once the £5,000 Government electric car grant is taken into account.
On the surface, the Leaf is also one of the most practical choices. Only the Audi has a longer wheelbase, so there’s room to seat five in relative comfort. The high roof means there’s more space in the back than in the Ampera, while a wide tailgate and 330-litre boot give it a slight edge for practicality. However, the bulky underfloor batteries mean it can’t match the A4 for interior space.
Yet because the Leaf has such a limited realistic range (expect around 60 miles rather than the 109 miles Nissan claims), it’s unlikely you’ll use it for anything other than short trips or a city commute, which makes the added space seem a little redundant.
Range anxiety also overshadows the rest of the Leaf’s driving experience. With 280Nm of torque instantly available, it offers the same brisk acceleration as the Ampera, particularly from a standing start. But the knowledge that there’s no safety net once the batteries are flat forces you to adjust your driving style.
Drive it gently, and the softer set-up and light steering mean the Leaf is better suited to city driving than the firmer Ampera, and it’s the quietest and most comfortable car here.
Unlike the others, the only running costs are insurance and servicing, plus a small rise in your electricity bill. However, because the Leaf needs to be charged and has a limited range, it’s the only car here that couldn’t really be used as a family’s sole means of transport. It makes sense as a second car for commuting and shopping, but struggles to compete with the Vauxhall’s wider appeal.

Chart position: 4WHY: The Leaf arrives fresh from a road test victory over the Renault Fluence EV, so it’s the best all-electric car on sale. We see if it’s the finest real-world choice.