Newcomer promises all of the benefits of an electric car, but few of the drawbacks 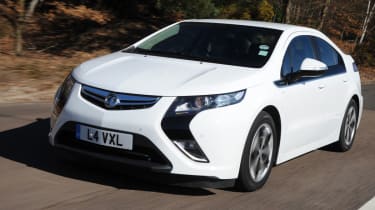 10
If the new Ampera delivers on Vauxhall’s claims, it could turn the motoring world on its head. By combining an eco-friendly electric motor with a range-extending petrol-powered generator, the newcomer promises to offer the commuting convenience of a Nissan Leaf with the long-distance fuel economy of a more traditional diesel saloon car.
The key to the Ampera’s capability is its novel Voltec drivetrain. A 148bhp electric motor powered by a lithium-ion battery pack will take the car around 35 miles before it needs a recharge. However, if you’re miles from the nearest charging point when the battery goes flat, a 1.4-litre petrol engine fires up to maintain the minimum charge, providing a further 200 mile-range until you can top up at a socket or petrol pump.
As a result, Vauxhall claims the Ampera will return a remarkable 235.4mpg while emitting only 27g/km of CO2. Yet 85 per cent of daily commutes are less than 25 miles, so most owners can expect even better, as their cars will spend most of their time in electric mode. With the price of a full charge around £1, they will cost absolute peanuts to run. So, can the Ampera really deliver, or is it just a futuristic flight of fancy?
There’s no denying that it looks the part. The sleek aerodynamic lines give it a coupe-like appearance, while the aggressively styled grille and swept-back headlamps help it to look more distinctive than its rivals.
It’s a similar story inside. Dominating the dashboard is a wide centre console, topped by a large, full-colour sat-nav screen. The shiny plastic finish looks and feels a little cheap, but the touchpad interface for the stereo and climate control adds to the hi-tech feel.
In front of the driver, another large LCD screen displays speed and the available range in both electric-only and petrol-extended modes. It looks overwhelming at first, but the clear layout means it’s straightforward to use. As you’d expect from a range-topping model, the Ampera is loaded with kit. As well as sat-nav, it features Bluetooth, a Bose stereo and leather trim. But its interior quality is nowhere near as good as the Audi’s, and our test car’s red door inserts looked garish.
The Vauxhall struggles to match its rivals’ practicality, too. The T-shaped battery pack eats into cabin space and makes the car a strict four-seater. Rear occupants suffer from limited head and legroom. Even worse, the 300-litre boot is the smallest here, while the ‘parcel shelf’ is a cheap fabric luggage cover.
With a full charge in the batteries, the Ampera feels very much like the Leaf to drive. The electric motor provides strong and seamless acceleration, taking the car from 0-60mph in only 9.7 seconds. In Sport mode, the petrol generator is used to give an extra boost for bursts of acceleration when you’re overtaking. There’s also a Hold function that uses the engine to maintain a full battery charge on the open road, leaving you with the full electric range for driving in urban areas.
On our commute, the Vauxhall’s batteries ran down at 32 miles, causing the generator to fire up. Still, the car managed a staggering 174.5mpg over the course of our 40-mile run.
It feels composed and capable on the road. The steering is direct, there’s decent grip and, while the ride is firm, this car doesn’t crash over bumps like the Lexus does. But it’s the refinement that really impresses. There’s very little wind and road noise, while the electric motor runs almost silently and the petrol engine settles down to a quiet hum.
At £33,995 (including the Government’s £5,000 grant), the Ampera isn’t cheap, but it managed 72.3mpg overall on this test, and if you spec an A4 to match it, the Vauxhall looks reasonably priced. But for this car to make sense, you need to fully charge it at least once a day. If you do this and avoid frequent long journeys, then the Ampera is a fine choice.

Chart position: 1WHY: Are range-extended electric cars the solution to our motoring needs? Innovative new Vauxhall Ampera should have the answer.