The Vauxhall Ampera has helped us to slash our running costs 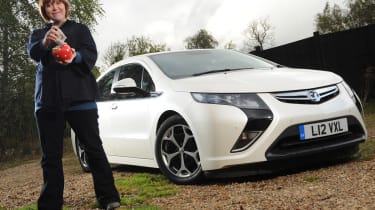 I’ve been stashing the cash I’ve saved by running the Vauxhall Ampera since June, and my piggy bank is now bursting at the seams.

This genius, best-of-both-worlds range-extending electric car has cut the cost of my daily commute into the capital from over £20 – including the £10-a-day congestion charge – to a mere £2 or so. Over the course of a year, that’ll be a saving of nearly £4,700 over my old Mazda 5 diesel.

Shame I can’t go crazy spending it over Christmas, then. The Ampera will be leaving our fleet any day now, so I’ll need every penny I’ve saved to cover the cost of filling up its replacement. It’s going to hurt.

Of course, there’s no such thing as a free lunch. Anyone wanting to enjoy the staggering fuel savings on offer the moment you drive an Ampera silently off the forecourt will have to pay through the nose up front. Prices start at £29,995, which is Audi A4 money. So buyers can’t be badge snobs, and will have to view the car very much as an investment.

My total fuel bill over the last five months speaks for itself. In that time, I’ve clocked up over 9,000 miles – including a trip to south-west France over the summer – and I’ve achieved an impressive 104.8mpg, which means a total fuel spend of £550. Electricity isn’t free, however, so the total cost of all the charges in that time needs to be added, too.

The ads promise a 50-mile range from the Ampera, but as with all electric cars, this depends on how and where you drive it.

I was getting a range of 32 miles on my varied commute. So, the car has been plugged into the mains at home every night since it joined our fleet, while the public car park near the Auto Express office has a number of bays that offer free charging.

As owners can pay as little as £1 per charge, depending on supplier and tariff, that’s still an electricity bill of only £153 to date, bringing my grand fuel cost total to £703. Even if you squeezed a true 45mpg out of your premium diesel saloon, you’d spend £1,311 on fuel over the same period.

Then there are the savings in Benefit in Kind (BIK) company car tax. Higher-rate fleet users have to shell out £1,705 a year in BIK to run an eco-friendly £26,705 Audi A4 2.0 TDIe SE. In contrast, owners of the £29,995 entry-level Ampera pay just £699. Plus, the Vauxhall is exempt from road tax and the London Congestion Charge, so its financial case gets even stronger.

Potential buyers may still be worried about this futuristic car’s reliance on electric gadgetry. Surely it takes little more than a short fuse for the whole thing to stop working? Not quite – although it has to be said that it’s not exactly been glitch free.

First, the radio jammed on traffic alert, then the charger packed up. The heated seats also refused to work, just as the cold snap hit Britain. Then a sticking catch made the charging point flap tricky to open. And finally, the car simply wouldn’t start, as it couldn’t detect the key fob.

My Vauxhall concierge was quick to collect the car as soon as I’d explained the problem. And it’s since been returned in full working order, but the dealer has yet to explain what went wrong.

Still, like all early adopters of hi-tech new kit, I’m willing to accept these niggles. The Voltec range-extending powertrain is still in its infancy, but our time at the wheel suggests the Ampera has a very bright future.

“The Ampera provides the best alternative yet to traditional diesel and petrol-engined cars. It really does deliver all the benefits of an electric car, but without the dreaded range anxiety.”James Disdale, Road test editor

“I use my Ampera for a 60-mile daily commute. In 10 years, I’ll have recouped the list price of the car in fuel savings I’m making over an Astra diesel.”David Peilow, via www.autoexpress.co.uk