Brit firms revolutionary 175mpg hybrid takes to the road and Auto Express is behind the wheel. 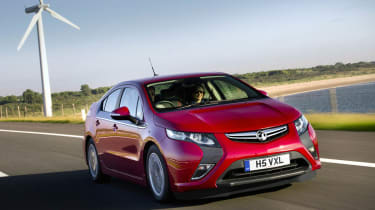 Performance, practicality and economy – the Ampera offers it all, and in a stylish package, too. For those who’ve had their heads turned by the rock-bottom running costs of electric cars, it makes a lot of sense. Having the best of all worlds doesn’t come without a high price, though, and the high initial outlay will mean the Ampera’s not for everyone. But if you’ve been thinking of going electric, you’ll be hard pressed to beat it.

An electric car that won’t ever leave you stranded after running out of charge – that’s the Ampera, according to Vauxhall. The firm says the newcomer offers it all – an electric-only range that’s usable for most daily drives, and the capability to do long-distance journeys. Auto Express has taken a spin in a full production model to see just what it can deliver in the real world.
Impressively, the Ampera can match the electric-only range quoted by Vauxhall in every-day driving conditions. We managed 50 miles – with the air conditioning and radio on, too. Once the range-extending petrol engine kicked in, we were a little bit more enthusiastic with the throttle, but even so, we still ended up achieving more than 120mpg.

It’s as refined as a conventional EV while power is coming exclusively from the battery. Tyre and wind noise are minimal even at motorway speeds, and the 370Nm of torque on offer from the electric motor ensures there’s plenty of pull. It covers 0-62mph in 8.5 seconds and carries on to a limited top speed of 100mph.
Once the 16-kWh lithium-ion battery is exhausted, the 1.4-litre Ecotec engine comes to life, but the electric motor continues to drive the wheels. The petrol unit is used to power a generator, which supplies the motor with electricity. The revs become noticeable in the cabin around 50mph, but are by no means intrusive. And as the battery can be fully charged in under four hours from a standard socket, chances are you won’t be hearing the engine much anyway.
For all its green credentials, the Ampera looks more sporty than eco-friendly. The boomerang wings and gaping vent makes for an aggressive face. And the thick black bar running across the rising waistline gives it a poised stance in profile. Inside, the cabin is high tech, with an LCD screen replacing the instrument panel and another at the centre console. Both offer updates on how economically you’re driving, as well as data on the remaining electric-only range or current mpg.
The cabin is comfortable and spacious and there’s plenty of boot space, too. If fact, the only thing that’s likely to give buyers pause for thought is the price tag. Even with the £5,000 Government grant it comes in at £28,995 – around £3,000 more expensive than the Nissan Leaf and considerably more than an efficient diesel model. But then the Ampera is more flexible than either of those options – offering enough juice to do a decent sized daily commute on electricity alone, plus the ability to go anywhere.
Share this on TwitterShare this on FacebookEmail