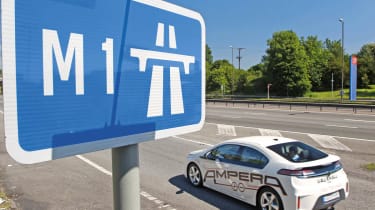 The new Ampera is certainly a revolution, but it's obvious there's still some development to be done. This is a staggeringly economical model and one that, for most journeys, can run solely on electricity. It drives like an ordinary car, too, so this isn't an eco-solution that will leave you stranded at the roadside. There's also a chance that it will be built at Ellesmere Port, which will safeguard jobs. However, at just under £30,000, it could be out of reach for most families.

ONE of the UK’s most ordinary motorways has just met an extraordinary car. In an exclusive test, Auto Express joined Vauxhall on a drive of its new Ampera electric family hatch up the M1, from the firm’s base, in Luton, Beds, to its plant at Ellesmere Port in Cheshire.

The 170-mile journey marks the Ampera’s debut on UK roads, but the destination is much more than just a photo opportunity. Owner General Motors has still not decided where the Ampera will be produced in Europe, and Vauxhall is keen for it to be at its factory in thenorth-west.

We took the wheel from Birmingham to the site on the banks of the Mersey.

So, how does the Ampera stack up? It’s radical to look at, and is even more so beneath the skin. While it shares the Astra’s basic chassis, under the floor is a 16kWh lithium-ion battery, and a 148bhp electric motor driving the front wheels. A 74bhp 1.4-litre four-cylinder petrol engine provides the extra propulsion and keeps the batteries topped up.

Inside, the cabin is similar to that of the Honda Insight and Toyota Prius, with its wraparound dash. It has leather upholstery, soft and comfortable seats, and the top-notch switches from the Insignia are all high quality. With maximum torque from idle, the Ampera scorches away from a standstill, although unlike its rivals, the drive motor is eerily silent. Top speed is limited to 100mph, with 0-62mph in nine seconds, and the unique driveline provides 40 miles of battery propulsion from a full charge.

For 90 per cent of journeys, Vauxhall claims the battery will provide enough range.

After 40 miles of electric-only running, the engine fires up to generate the electrical current required to propel the car and maintain the battery charge.

The 30-litre fuel tank gives 311 more miles of range. Economy is calculated at an incredible 175mpg.

Vauxhall believes customers will have to get used to the noise of the engine; it cranks up with no relation to what speed you’re doing, which is quite weird.

The Ampera weighs about 1,600kg, and feels a little heavy, but the battery is mounted low and centrally, so there’s little body roll. When it goes on sale in 2012, the car is likely to get Vauxhall’s Flexride adjustable dampers, to improve steering and suspension response. At motorway speeds, there’s a fair bit of roar from the eco-tuned Goodyear tyres and some wind noise across the unfinished body panels. But more of a problem is the poor high-speed acceleration.

To solve this, General Motors plans to unveil a mechanical direct-drive from the engine to the wheels through the existing twin-clutch gearbox.

This would reduce the energy losses of turning petrol power into electricity to drive the car at high speeds, and would also enhance overtaking performance.

The company is also considering an ‘electric-only’ button, which would allow drivers to save their battery range for use in restricted urban areas. It’s clear there’s still some way to go then, but the Ampera is on the right road.