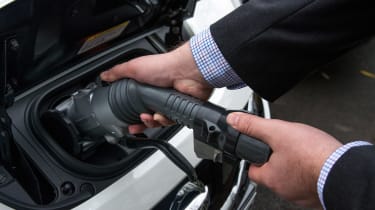 Three out of five new cars and vans sold in the UK will need to be ultra-low emission vehicles (ULEVs) by 2030 if the Government is to meet emissions targets, a new report has claimed.

The 'Independent Assessment of the UK’s Clean Growth Strategy', a report by the Committee on Climate Change, says that if emissions levels are to fall in line with EU targets, three fifths of new cars and vans sold by 2030 must emit less than 75g/km of CO2. The targets call for a 44 per cent reduction on 2016 emissions levels by 2030 and the report suggests hitting this will necessitate a major shift to low emissions vehicles. ULEVs currently available on the UK market include hybrids like the Toyota Prius and pure EVs like the Nissan Leaf.

The report's authors refer to the Government’s ambition that 30-70 per cent of new car sales should be made up of ULEVs by 2030, but argue that it “will be necessary to deliver towards the upper end of the range for cars”, highlighting a 60 per cent minimum as ideal.

The document also says “it may be necessary for the sales of petrol and diesel vehicles to end by 2035”, bringing forward the much-publicised ban on conventional petrol and diesel cars that are not hybrids by five years.

The report warns, meanwhile, that “greater ambition” is needed for lowering emissions from light commercial vehicles and vans, which currently have a 40 per cent ULEV target by 2030. It goes on to caution that: “There is little concrete action on emissions from HGVs.”

It’s not just electric, hybrid and plug-in hybrid cars that hold the possible answer to the future air quality issue: one scenario postulated imagines hydrogen as “the dominant energy carrier across the economy by 2050”, powering “all cars and vans” – though this would require “extensive development” of infrastructure.

The report’s authors praise the Government’s “strong commitment” to meeting climate targets, but warn that “risks of under-delivery” must be addressed. Previous policy from Whitehall has held it as the Government’s ambition “for almost every car and van on the road to be a zero emission vehicle by 2050.”