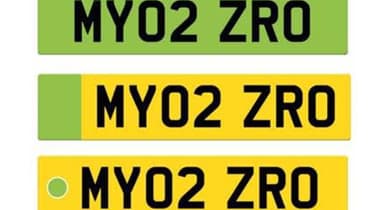 Proposals that plug-in hybrids and all-electric cars should be given green number plates in order to offer their drivers incentives, such as the ability to drive in bus lanes and free or reduced parking charges, have been criticised by a government privacy watchdog over concerns the system would require “an unqualified extension to the role of ANPR” (automatic number plate recognition). The watchdog also questioned whether the plates would have any positive impact, and if there was any public demand for the green plates.

The Department for Transport (DfT) launched a consultation last year into whether ultra-low-emission vehicles - ULEVs - which typically emit under 75g/km or 50g/km of carbon dioxide - should be given green number plates, with local councils and transport authorities granting their drivers incentives.

But the Surveillance Camera Commissioner’s response to the consultation warns that such incentives would almost certainly rely on the UK’s vast network of ANPR cameras. Such a use of the ANPR network would, the Commissioner says, be legally questionable, as it is “beyond the initial purpose of ANPR and further stretches its legitimacy.”

Police forces and local councils run networks comprising thousands of ANPR cameras, which carry out around 10.1 billion number plate scans a year, generating 203 million hits on vehicles of interest, and resulting in fines equivalent to £472 million over five years. The cameras are used for myriad purposes including locating and tracking stolen cars, issuing bus lane fines, and granting access to car parks.

But using these cameras to facilitate green number plates prompted the Commissioner to ask: “Where is the evidence to prove that the extension to the ANPR function is justified? Limited evidence was presented that car drivers want green number plates or that it is for the benefit of society. Therefore, the legality was questioned.”

While the Commissioner’s response supports Government policies that aim to reduce pollution and says that “clean air is fully recognised as being paramount”, it warns that “whichever green number plate design is chosen, it should have no impact on the National ANPR service.”

The Department for Transport says giving zero-emission vehicles - including electric cars - green number plates would give local authorities a visual identifier which they could use to enforce incentives for the drivers of such vehicles, like allowing them to use bus lanes or pay less for parking.

The consultation is part of the DfT’s £1.5 billion Road to Zero strategy and takes inspiration from a scheme in Ontario, Canada where drivers of electric cars were given free access to toll lanes and high occupancy vehicle lanes, leading to an increase in EV registrations. It’s hoped UK local authorities would implement similar policies with the aid of the green plate scheme.

Grant Shapps, Secretary of State for Transport, said: “Green number plates are a really positive and exciting way to help everyone recognise the increasing number of electric vehicles on our roads. By increasing awareness of these vehicles and the benefits they bring to their drivers and our environment, we will turbo-charge the zero emission revolution.”

Nicholas Lyes, head of roads policy at the RAC, has also cast doubt on the scheme though, saying: “While the sentiment seems right, there are question marks as to whether drivers would see this as a badge of honour or alternatively it could foster resentment among existing drivers of petrol and diesel vehicles.

“On the face of it, drivers we’ve questioned don’t seem too impressed – only a fifth think it’s a good idea and the majority said the number plates wouldn’t have the effect of making them any more likely to switch to an electric vehicle.

“Incentives may make a difference in the short term and the possibility of free parking and the permission to use bus lanes at certain times could encourage some to switch, however many drivers remain cool on the idea even with this encouragement. Also, if these perks were to do their job and encourage people to switch, councils would have to quickly get rid of them again as they’d be losing parking revenue and no doubt be accused of allowing bus lanes to become clogged with electric vehicles.

“Given their relatively high upfront costs, only those drivers that could afford to make the switch to an electric vehicle would benefit – leaving the vast majority who still rely on petrol and diesel cars losing out.

“We continue to believe that the best way of encouraging drivers to ‘go electric’ is for the Government to be providing the right financial incentives at the point of purchase, and investing in better charging infrastructure.”

Edmund King, president of the AA, added: “Around two-fifths of drivers say that all new ultra-low emission vehicles should be fitted with a green plate when it rolls off the forecourt. While some will see it as a ‘plate of honour’, drivers should be given the option of adding them onto their vehicle. Other incentives, such as cheaper parking, will help, but reinstating the grant for hybrids would also encourage those not ready to go for the full EV.”

Are green numberplates for 'green' cars a good idea? Let us know in the comments...