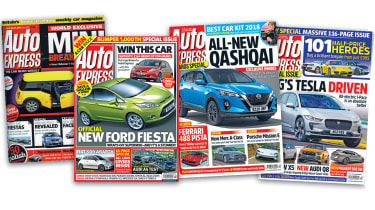 What better way to celebrate 30 years of Britain’s best-selling weekly car magazine than by picking out some of the star cars we’ve had the privilege of reporting on – and often scooping before they’ve been officially revealed!

We’ve listed what we think are 30 true game-changers from the past three decades. These are models that have been popular with us and with you, and have been responsible for setting new standards for cars in their respective classes. Some of them have invented completely new classes altogether.

There are brands in our list that didn’t even exist 30 years ago, while other makes have transformed beyond all recognition. And if you’d have asked us back then if we’d have the level of technology, quality, style, safety and performance that we benefit from today (at affordable prices), it would have been beyond our wildest dreams.

Joining us for our trip down memory lane are some familiar faces from Auto Express’s past. We’re delighted that some notable former staff (you’ll know them well) have joined our current team in nominating their favourite cars from their time on Auto Express. It’s great to have them back and to read about their choices.

But of course, Auto Express hasn’t just reported on the cars; we’ve also brought you the biggest news stories and ground-breaking investigations. So we’ve also got a rundown of some of the biggest stories we’ve reported on during the past 30 years.

Finally, we’ve got an opportunity like no other. We’ve been writing about cars for 30 years, so we thought it was about time we made one ourselves! And we’re giving you the chance to win it and drive it for the next six months.

We’ve teamed up with SEAT to create a special edition of its fabulous Mii city car. And when we say ‘teamed up’ we really do mean teamed up, because we’ve worked hand in hand with SEAT’s designers to create the Mii ‘by Auto Express’. It’s a one-off version wearing Auto Express colours and we’re giving you the chance to drive it. 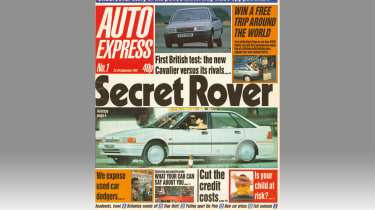 Over 30 years and 1,543 issues Auto Express has made a name for itself for delivering exclusive news stories. Some of our biggest scoops come from investigative journalism, long nights and loose-lipped executives. However, one of the biggest ever scoops to feature in Auto Express came from you, our readers.

Back in May 2004 we were the first magazine in the world to publish images of the Mk2 Ford Focus. A reader, who stumbled across a customer clinic for the hatch while out walking his dog, sent in the images. Much to Ford’s annoyance, the car was left unguarded and a full set of snaps were grabbed. It was on the cover of issue 806, four months ahead of the car’s debut at that year’s Paris Motor Show.

Fast forward 14 years and Auto Express delivered another Ford Focus world exclusive as we were the first magazine to get behind the wheel of the all-new Mk4 hatchback. We managed to nab the keys ahead of the car’s official media launch and take it on a 300-mile trip across Germany.

Click the links below or at the top left of this page for our breakdown of the best cars from the three decades of Auto Express...