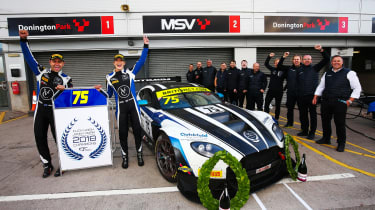 Flick Haigh has become the first female driver to win the British GT championship outright, after finishing fourth in the final race of the season at Donington Park.

The 33-year-old amateur - whose pro teammate Jonny Adam tasted GT3 success for a record third time - follows in the footsteps of British F3 driver Jamie Chadwick, who became the first woman to win the lower GT4 category back in 2015.

The Optimum Motorsport pair needed to finish sixth or higher to ensure they couldn’t be caught in the drivers’ standings, and they got off to a solid start on Saturday by qualifying fourth in their Aston Martin V12 Vantage. 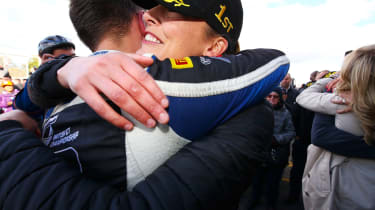 Barwell Motorsport’s Jon Minshaw and Phil Keen posed the biggest threat heading into the weekend, and they piled on the pressure by taking pole in their Lamborghini Huracan with a combined time of 3:21.472s; more than three seconds faster than Haigh and Adam.

TF Sport’s Mark Farmer and Nicki Thiim also had an outside chance of snatching the championship, and although they battled through to take the chequered flag in Sunday’s two-hour race, a late 30-second penalty for exceeding track limits saw them demoted to second behind Mishaw and Keen.

With ERC Sport’s Lee Mowle and Yelmer Buurman taking the final podium position, Adam was content to bring the car home where they’d started in fourth, securing the points he and Haigh needed to seal the title and sign off the V12 Vantage’s final GT3 race in style.

The British GT crown is Haigh’s biggest achievement in motorsport to date, having started out racing Caterhams more than a decade ago.

She entered the GT3 championship this season with an eye on a proper title campaign in 2019, but hit the ground running alongside Aston Martin works driver Adam with victory in the opening race at Oulton Park in April. 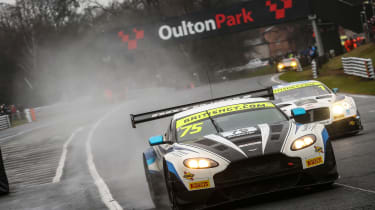 Adam - whose other British GT titles came in 2015 and 2016 - says he recognised Haigh’s pace straight away, believing as early as January that they could mount an immediate championship challenge.

“But we put the work in,” he insists. “People don't realise that we don't just turn up on a Friday night and go racing on Sunday. We've done a lot of testing behind the scenes.

“Flick's probably one of the only teammates I've raced in British GT with who puts that extra mile in to get the results. It pays off massively. If you want it that bad, you will do little bits to make sure you're 100 per cent ready for it.”

Haigh and Adam prepare for each race in a Base Performance simulator, which allows them to get within a few tenths of their real-world lap times and identify potential weaknesses early on.

“That's massive,” says Adam. “It's like you're doing three practice sessions when everyone else is only doing two.”

For Haigh, success this season has catapulted her into the limelight, something she admits to finding “quite hard” as an ordinarily “shy person”. The victory at Oulton Park was the first outright British GT race win for a woman, drawing attention right from the start of the campaign.

“But it's actually helped my confidence,” she explains. “I think it's hit home in the last couple of months that actually, this is a massive thing. People are taking a huge interest in it, and for me that's important. 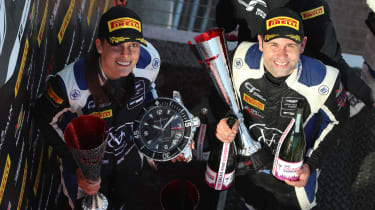 “Hopefully, there's kids out there that think 'Oh, motorsport is open to everybody’. There's no reason why it should just be male dominated. It's not about strength, it's about mindset and persevering.

Adam agrees, saying the interest from young girls is visible in the paddock: “It opens doors for a lot of people. I coached Jamie [Chadwick] when she was only 14, 15, and she was like Flick: she was putting the graft in behind the scenes. Not because she wanted to be the best female on the grid, she wanted to be the best driver on the grid. And it’s quite refreshing to see that.”