Back to school: racing drivers take their advanced driving test

Can up-and-coming racers learn anything about driving on the road from IAM Roadsmart’s instructors? We head to Silverstone to find out.. 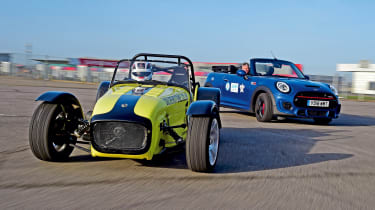 Anyone who is related to or friends with a petrolhead knows a track day makes the perfect present. Giving a keen motorist the chance to try their hand at driving, free from the shackles of traffic and constraints of the rules of the road, is certain to go down well. Learning how to drive on the track is bound to improve one’s ability to control a car on the road, too.

But that logic doesn’t work the other way round, does it? Surely professional racing drivers consider public roads mundane, and their expertise means they have little to learn from the world of merging in turn, giving way at roundabouts and keeping their distance from the car in front?

Well, IAM Roadsmart (formerly the Institute of Advanced Motorists) thinks differently, and has decided to put a group of 19 racing drivers through its advanced driving test. The aim is to highlight the transferable skills between track and road, and emphasise the importance of the advanced driving test, even for the most skilful motorists.

The drivers in question are all members of the British Racing Drivers’ Club (BRDC) Rising Stars programme, which recruits promising young racers in the hope they will go on to forge a successful career in motorsport. 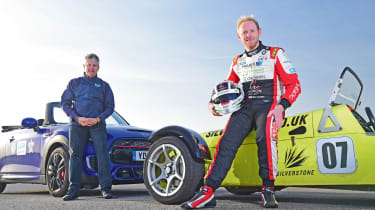 We headed to Silverstone – the home of British motorsport – to witness this group of up-and-coming drivers sit their advanced driving tests, and to find out from them, as well as their instructors and assessors, what the road can teach those who spend the majority of their time on the track.

The day starts with these rising stars showing what they can do in their natural environment: setting lap times on a handling circuit in Caterham Sevens. It’s a thrilling experience to watch, and no doubt an exciting one to take part in, but doesn’t the advanced driving test seem somewhat tame by comparison?

We begin by asking this question of 24-year-old Max Coates, who competes in the Renault UK Clio Cup and is also a fully-qualified racing instructor. Coates admits he had some initial misgivings. “I expected to be told to ‘go slower’ and ‘don’t have fun’,” he says. “But it’s not been like that at all. The instructors are driving enthusiasts at heart as well, and encourage you to enjoy your driving.”

Coates’ observer, David Baverstock, helped him prepare for his advanced test, and tells us his on-road driving was far removed from his racetrack behaviour. “He was actually driving in a very reserved way,” Baverstock explains. “I imagine that was because he didn’t necessarily know what was expected.”

Despite some initial caution, Baverstock says Coates’ track instincts soon made themselves evident on the road. “He tended to turn in quite early, which you may well do on track to widen the cornering line as much as possible and make the most of the available grip,” Baverstock tells us. “But on the road, we tend to want to turn in quite late so we’ve got as much of the view round the corner as possible before we choose our line.”

Baverstock’s role was “to notice things about the way that the guys are driving and to suggest other approaches that they might try out”. He says Coates, and all the other racers he’d coached, are “really fast learners” who are “keen to consider all kinds of different ideas and approaches”. 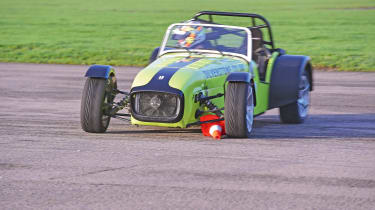 While most people taking the advanced driving test need around seven observation sessions on average – with each one lasting roughly 90 minutes – these racers’ innate skills mean they are able to undertake a condensed one-day course, although they would go on to sit the same 45 to 60-minute test as other candidates. Observers such as Baverstock are responsible for preparing the racing drivers for their advanced test, but it falls to assessors to actually supervise that assessment and then award the final mark following the examination.

Coates’ assessor, Shaun Cronin, is one of IAM Roadsmart’s many former police officers, and explains the advanced driving test assesses candidates on 23 individual categories. These include areas one would expect a racing driver to excel in, such as overtaking and gearchanging skills, together with aspects not normally associated with the track, like eco driving and courtesy to other road users.

“They are very skilful drivers on the track,” Cronin says. “Our job is to take that skill set and put it into the road-based scenario.” He is convinced these skills are easily transferable, though, and adds: “Travelling at the right speed, with the right gear engaged, at the right place in the road is actually what they do on the racing circuit.”

There are similar parallels in cornering, Cronin explains. “As they’re approaching a bend, they’re going to get the car in the right position; we’re asking the same,” he says. “They’ll then get the speed right by brakes; we want the same. And then they will drive that car through the bend on the track; exactly the same on the road, at an appropriate speed.” 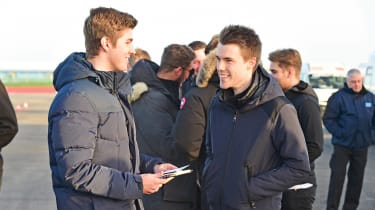 On a passenger ride with Coates and Cronin, we witness the sorts of things the advanced test assesses. Approaching the crest of a hill and seeing a bin lorry parked on the side of the road, for example, Coates slows down in anticipation of binmen in the road. It’s a small detail, sure, but it’s indicative of the kind of broad forward thinking the advanced test expects of those taking the examination.

“The test is going to make the roads a safer place because drivers’ observation, anticipation and planning is much better,” Cronin adds. “But they will also enjoy their driving more, and the trade-off will be most insurance companies offer a discount for people who have passed the test.”

But before considerations such as reduced premiums can be thought about, there’s the small matter of the test itself. As concentration, from candidate and assessor alike, is key to the test, we sit this one out as driver after driver heads out in one of a fleet of BMW 1 Series and MINIs, before coming back an hour or so later, test certificates in hand. 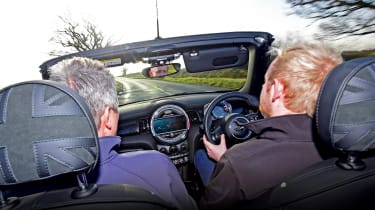 All the drivers taking their tests today have passed, and because the full results are read out in the BRDC clubhouse, Coates is no doubt one of the happiest people in the room. Not only has he achieved the fastest time in the Caterham challenge earlier on, but he has also passed his advanced driving test with a first – the highest grade on offer.

What is the key thing Coates has learned? “The importance of how far you look up the road,” he says. “We’re less likely to be involved in any incident and, if we get to a point where that looks more likely, having the skill set to avoid that will certainly minimise any risk.” After a pause, he adds: “What we’ve been taught definitely makes us more skilful in terms of road driving.”

And if a driver as highly trained as Coates can say that, it’s fair to say an advanced test is likely to make almost any motorist better, and safer on the road.

Taking you driving test soon? Click here for our top tips on how to pass first time...

A near production-ready version of the latest BMW 4 Series Coupe has been spied, wearing a pair of huge kidney grilles.
Visit/news/351926/mot-tests-six-month-extension-granted-wake-coronavirus

Transport Secretary announces six-month MoT extension for drivers whose cars are due MoT from 30 March, though vehicles must be kept “in roadworthy co…
Visit/renault/captur/351906/renault-captur-vs-ford-puma-vs-peugeot-2008

The Renault Captur, Ford Puma and Peugeot 2008 have all just been launched. We bring them together for their first Auto Express group test
Skip to HeaderSkip to Content