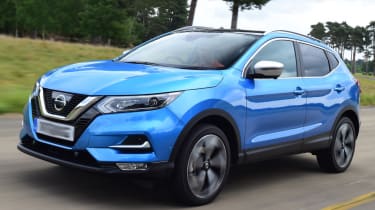 The Driver and Vehicle Standards Agency (DVSA) has criticised Nissan for taking an “unacceptable” approach to addressing issues relating to a diesel Qashqai that emits 17 times more nitrogen oxide (NOx) in real-world conditions than it did when assessed under NEDC measures.

In its latest Vehicle Market Surveillance Unit report, the DVSA revealed that the Qashqai it tested passed the NEDC tests it was legally required to, but under the newer on-road RDE test element of the WLTP assessment it was found to emit far more NOx than would be permissible were the car to be type approved today.

Despite these readings, Nissan decided not to take any action over the Qashqai engine in question, arguing it had improved its emissions strategies since 2015 and had launched a Qashqai with SCR (selective catalytic reduction, or AdBlue) in 2018, claiming that it couldn’t carry out a recalibration on existing cars as it wants to focus its resources on new models.

Nissan also told the DVSA that the function of the EGR (high pressure exhaust gas recirculation) would be reduced in lower temperatures, resulting in higher emissions in real world conditions.

The DVSA said: “We find Nissan's approach on addressing these extremely high emitting vehicles unacceptable as we are aware that Renault, who uses a similar engine in the Kadjar, issued a voluntary offer to customers visiting a Renault dealership to implement a NOx upgrade.”

The Agency initially thought there could have been a problem with the specific car they were testing due to its high emissions and the fact it showed “no clear evidence” of any DPF (diesel particulate filter) regeneration – the process by which excess soot is cleanly burned off to regenerate the DPF.

When a second Qashqai was tested, though, it also emitted high levels of NOx under the same testing conditions. The DVSA said that this “significant exceedance” meant the Qashqai was “not sufficiently well designed to control NOx in real world conditions”.

Ian Bartlett, head of the DVSA's Vehicle Safety Branch said: “The DVSA’s priority is to protect everyone from unsafe drivers and vehicles. Vehicles which create excess emissions are a danger to us all. The Market Surveillance Unit plays an important role in checking that vehicles placed on the UK market fully comply with relevant emissions standards. We will continue to press manufacturers to get it right.”

In a statement, Nissan said: “All Nissan vehicles fully comply with today’s emissions legislation. This report, which looks at the variation between lab and ‘real world’ conditions, shows variances for some brands tested.

“We support the new RDE tests that have now been adopted and have introduced a range of drivetrains to meet them. We will continue to develop affordable and innovative solutions to reduce our impact on the environment, such as our Nissan Leaf and e-NV200 electric vehicles.”

Click here to read our in-depth review of the Nissan Qashqai...