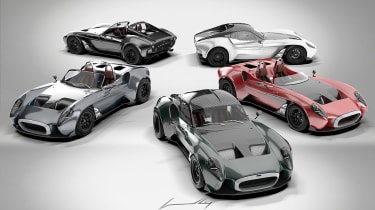 Jannarelly Automotive, the Dubai-based start-up manufacturer has launched a limited edition version of its retro-styled sports car designed specifically for the UK market.

Called the Design-1 UK edition, it features a unique paint job and a handful of cosmetic enhancements over regular versions of the low-volume newcomer. Production is limited to just five examples, with each bearing a price-tag of £115,549.

The five Jannarelly Design-1 UK Edition are finished in red, white, blue, green or grey paint – and each example features a white grille surround, which the brand says is reminiscent of vintage British race cars. Each car also features a range of special edition badges and a new carbon fibre engine cover, complete with a black and white Union Flag. 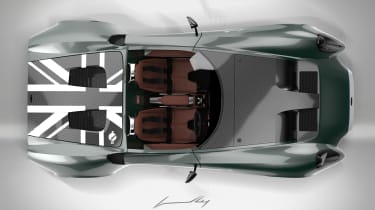 Like the standard car, the special edition Design-1 is powered by a Nissan-derived, naturally aspirated 3.5-litre V6 engine, which produces 321bhp at 6,800rpm and 371Nm of torque at 4,800rpm. The engine sends its power to the rear wheels via a six-speed manual gearbox, offering a claimed 0–60mph time of “less than four seconds.”

The Jannarelly Design-1 is a lightweight, road-legal weekend toy designed to rival the new Morgan Plus Six. The standard car has been on sale in the UK since November 2019, in a limited production run of just 499 examples, with each bearing a starting price of £86,000.

The Design-1’s styling is heavily influenced by the Le Mans GT racers of the 1960s, sharing a similar long bonnet, flared haunches and short, upswept tail as seen on the 1962 Ferrari 250 GTO and the 1964 Shelby Cobra Daytona. Like the classic racers, it’s also very light thanks to its tubular space frame chassis and optional carbon fibre panelling.

With the optional carbon fibre bodywork selected, the Jannarelly Design-1 tips the scales at 850kg, which gives it a power-to-weight ratio of around 380bhp per tonne. To manage such performance, the car’s chassis features a limited-slip differential, vented four-piston disc brakes for the front axle and a set of lightweight alloy wheels wrapped in Pirelli P Zero tyres.

It’s a highly customisable product, with buyers offered a wide range of exterior paint finishes, a pair of uniquely trimmed carbon fibre and leather bucket seats and the choice of three body styles (Coupe, Roadster or Aero). Buyers can even choose from a range of Nardi or Momo steering wheels, in either leather, wood or Alcantara trim.

Jannarelly Automotive was founded in 2016 by racing boat builder Frederic Juillot and car designer Anthony Jannarelly – the man responsible for the Lykan HyperSport’s styling. Jannarelly also penned the Design-1’s styling, originally as a bespoke personal project, as a “retro-futuristic tribute to sports cars of the 50s, 60s and 70s.”

What do you make of the Jannarelly Design-1? Let us know in the comments section below…