How to spot a fake service history 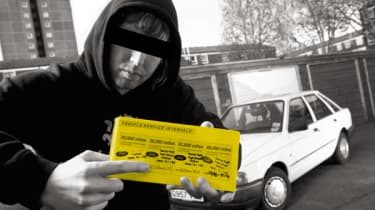 What does it take to double the value of a car? A lot of aftermarket extras? An expensive audio system? No, the answer is £20 and a bit of time spent on the Internet. That's all it took for Auto Express to create a fake service history for a vehicle to corroborate phoney mileage and thereby increase its value by 100 per cent. It's the latest way crooks are ripping buyers off - so we went undercover to reveal the con...

A full service history is one of the staple ingredients of every good used car advert. It shows that the vehicle has been properly maintained, helps vouch for the mileage and if the stamps are from an official dealer, then all the better. A smart seller will include the letters FSH right at the top of the description in their ad, because they know it's something people want to see. And if it's not there, any sensible buyer will ask why not.

But even if the seller has a service book full of stamps to show when you go to view the motor, how do you know if it's genuine? Well, you don't. What's more shocking is that crooks are inventing service histories to boost resale values. And we know it's happening, because we've done it!

For security reasons we're not going to reveal exactly where we purchased the items necessary to do the job, but everything can be found after a few minutes surfing the Internet.

The automotive industry has reacted with alarm at the simplicity with which we invented new maintenance documents. The Society of Motor Manufacturers and Traders (SMMT), which is the umbrella organisation for the UK's car makers, was so shocked with our findings that it's calling on local authority watchdogs to crack down on anyone taking part in this illegal practice.

For our investigation, we bought a 1989 Ford Escort 1.6 GL automatic. The car has done 131,000 miles, but its bodywork and interior are in excellent condition. It's got some service history with it, but the last time the logbook was stamped was in the early Nineties. We wanted to see if we could create a written record that would convince people it had only done 31,000 miles, which is what it says on the five-figure odometer that has been round the clock once.

On the Internet, we quickly found someone offering what they claimed was a genuine Ford logbook. Crucially it was blank, and after an E-mail exchange with the vendor, we were confident it wasn't a cheap fake. But before we clinched the deal - total cost £20 - the seller made us an unusual offer. He revealed that he also had a legitimate dealer stamp and offered to mark up the book for us!

Our new friend gave the impression that he had done this sort of thing before. In an E-mail to us, he wrote: "I would not recommend putting more than four stamps in any book. You can then fill it in accordingly, depending on the car. For a modern motor you can either go for 8,000, 10,000 or 15,000-mile intervals. Then you've got a new service history." A quick phone call to a local Ford dealer established that in the case of our old Escort, a major maintenance check is recommended every 12,000 miles or annually, with an oil and filter change every six months.

We agreed to the deal, and two days later the new service book arrived in the post. It was the genuine article, with 'Service Portfolio' and Ford's famous blue oval badge on the front cover. Inside, after all the small print about the warranty, was the page where the dealer ink stamps are supposed to go. This was pristine, except for the first four spaces which had a Dagenham Motors service stamp in them.

It all looked 100 per cent real - we know the phone number was correct because we rang it to check. And there was even space for us to fill in fictitious dates, mileage and whether genuine Ford parts were used by the mechanic.

Ford was shocked when we explained what we had done, how easy it was, and the way online criminals could do the same to rip off innocent car buyers. "This is appalling," said a spokeswoman. "Not only is it misuse of our trademark, it's rogue trading and we will be monitoring the situation closely."

But what would we have done if the man who sold us the blank book hadn't had the Dagenham Motors stamp to help us out? Easy... we would have bought our own and done the inking ourselves. Another few minutes on the Internet, and we found someone selling stamps and offering to put whatever car company logo we wanted on them, plus a few lines of text, for only £54.

Again, through E-mail correspondence with the vendor, we were able to get him to make one up with a Ford logo. We could easily have copied the words and details of the Dagenham Motors stamp from the service book, but instead opted for a fictitious dealer name - Yarrow Ford - and gave a false address to illustrate the point. It would have been easy to add a phone contact, too, which is another good way to con a victim. The number could have been ours, so anyone ringing around to check the history of the car would get us telling them the Escort is a rare low-miler in first class condition!

Once the stamp arrived in the post, we filled in the blank spaces in the car's original logbook, and when that was full, started stamping the book we got off the Internet, following on from the Dagenham Motors stamps. Finally, we wrote in the necessary dates and mileage information so that it appeared our car had a full service history and a genuine 31,000 miles on the clock.

The EurotaxGlass's spokesman added: "With a car of this type and age, a full manufacturer service history doesn't necessarily make a great difference to the value - unless you are using it to vouch for bogus mileage. However, it does with a prestige model such as a BMW or Mercedes."

Sure enough, we found service stamps for both those firms and Lexus, Jaguar, Saab and Audi for sale online. In the world of prestige motors, a full manufacturer service history could add between £1,000 and £1,500 to the value. Used car buyers are prepared to pay as much as that to know a car has been well looked after.

A spokesman for The British Independent Motor Trade Association (BIMTA), which represents 150 non-franchised dealers, told us: "This is one of the more unsavoury and unfortunate side effects of people trading cars on the Internet.

"There are people in the motor trade who can be creative when it comes to the truth. Unfortunately, the Web has given them a new way to con people." The SMMT was also very concerned by our investigation and told us: "Our members will be extremely concerned about anyone using their trademark illegally.

"We are in the process of developing new codes of practice to boost the image of the industry and the service we give to customers. The sale of blank service books and stamps is something we want to crack down on, and we are calling on local authority Trading Standards departments to act now."

The BIMTA spokesman told us the trade in fake service records was a recent phenomenon, but one that's probably only going to get worse.

"We're not hearing too much about it at the moment, but that's possibly because a lot of people haven't cottoned on to it yet," he said. And that's perhaps the scariest thing of all.

How To Check A Vehicle History

We contacted the people behind the website where we bought the items for this report. A spokesman told us: "It isn't illegal to buy or sell dealer stamps and service books. We provide lots of information to people to help them with their purchases, but it's not our place to question the motives of why people are selling things."

He suggested that before you buya used car you should get a vehicle history report, which will flag up any stolen cars, insurance write-offs, and any outstanding finance or mileage inconsistencies. However, it won't spot fake service records, although it might throw up some information that will make you suspicious of the maintenance schedule you're shown by the car vendor. Firms offering background checks include HPI (01722 422422), the AA (0800 056 8040), the RAC (0800 015 8767) and BIMTA (www.bimta.co.uk).

The spokesman's other recommendation was to "call the garages involved". HPI gave the same advice, but depending on the age of car and size of dealerships involved, the information required may not be easily accessible. One further piece of advice - conscientious owners will keep the receipts for any work doneto show future buyers. If the car you're viewing doesn't have those, ask why

What The Law Says

Creating a false service history for a car is covered by the Trade Descriptions Act 1986, which prohibits applying a false description to an item. The law views as more serious selling something to which a false history has been applied. Even if you didn't create the ficticious paperwork yourself, but tried to sell it on to someone else, you would still be guilty. In a magistrates court, the punishment can be a fine of up to £5,000 per offence. But if it goes to a crown court, a judge could specify an unlimited fine or a prison sentence of up to two years. The law applies to individuals and traders