Cars you can drive at 16

Yes, you can drive a 'car' in the UK aged 16! Welcome to the quirky world of AM-class light quardicycles… 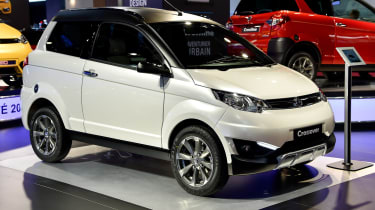 It's a frustrating time of life, being a 16 year-old. You're old enough to lead an independent life from your parents, and yet you're still not quite old enough to drive a car. However, there are ways of getting behind the wheel with a provisional GB licence and a bit of creativity.

The youngest you can be to apply for a provisional licence is 15 years and nine months, although the rules state that you can only drive a car after you turn 17. In the meantime, you can ride certain scooters if you've passed your Compulsory Basic Training (CBT), and this provisional licence also allows you to drive what's known as a quadricycle.

There is another way to be able to drive on the road when you're 16, and that's if you qualify for the Government's Personal Independence Payment (PIP). This is an assistance scheme for the long-term ill and disabled, and allows those that qualify for PIP to be able to pass their full driving test from the age of 16, giving them greater freedom of mobility.

There are other ways of driving before you're 17. If you or your family own a large piece of private land, then there's nothing stopping you from driving here, although we wouldn't recommend doing this in anything other than an old banger, as you won't be insured against damage or injury to yourself or anybody else.

The sensible way to drive under age is to book a driving experience. These usually take place at race tracks or experience centres across the country, and the locations will have full safety equipment and be insured against any accidents or incidents. The age restriction for an experience could be as low as 10 years of age, although there will also usually be a minimum height requirement, too - to ensure that you can sit comfortably at the wheel and have a clear view of your surroundings with the steering wheel and pedals within easy reach. You'll be given expert tuition in this environment, and some experiences will even allow you behind the wheel of some fast cars, if the session you've booked allows it.

What is a light quadricycle? 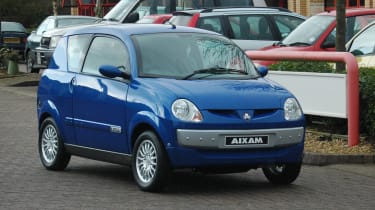 A light quadricycle is the only four-wheeled vehicle that you can drive legally on the road when under the age of 17. You may never have heard of them, but there are tiny, low-powered, lightweight machines that only require you to have passed your CBT scooter test before you can drive. The one quadricycle you might have heard of is the Renault Twizy, the tandem two-seat electric vehicle with an open cockpit and rudimentary doors. But there are other models available, all from French manufacturers, because quadricycles are a popular form of cheap personal transport in rural areas of France.

To qualify as a light quadricycles, the vehicle has to weigh less than 350kg (not including batteries if they are electric) and have a top speed of less than 28mph. Then there's the price, these vehicles tend to fall in the £10,000 bracket, so you're basically paying the price of a conventional city car to get on the road a year early.

Most young motorists will decide that the substantial downsides attached to quadricycles render them not worth the effort or money, so will go for a moped instead until they can get a full driving licence. But for the winter months having four wheels, four seats (in some models) and a roof over your head might be an attractive idea and you can bet that none of your friends will have one!

So what are some of the choices for a 16 year old with a pocket full of cash and a fresh CBT certificate? Check out some of the quadricycle options below… 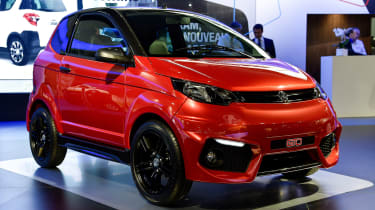 Aixam is a company that specialises in these tiny AM-licence vehicles in Europe, and some models are available in the UK. You can choose from a 'Coupe' or 'Crossover' model - although the only real difference is looks - and a variety of colours. Don't be fooled by the Coupe model's rear spoiler - this tiny quadricycle features a 400cc diesel engine and only has a single forward gear.

It does feature an enclosed cabin, though, so the weather should stay out - and that will be the main draw compared to a moped, especially for those using it for commuting. 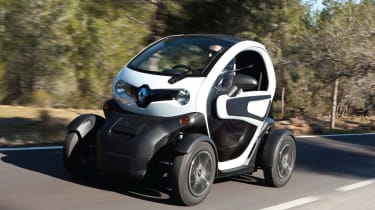 If you're after more of a big-name brand, Renault has actually produced a quadricycle that can be driven at 16 - the all-electric Twizy. While the main version of the car does not qualify - it is too fast and too heavy to comply - there was a Twizy 45 that was designed specifically for 16 year old drivers. However, it never went on sale officially in the UK, so you would have to import one! 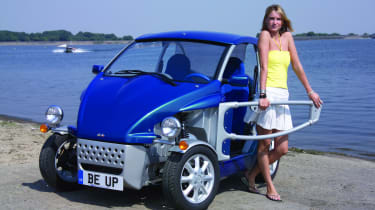 There are also a handful of cars from various manufacturers such as Ligier over the years that may qualify, but again it may be a case of importing them from continental Europe or finding a second-hand one in the back of a local paper.

Should you buy a quadricycle?

These days Aixam is really the only easy choice for 16 year olds looking for a 'car' - as many insurers will not cover these drivers, and the ones that do are wary about anything but that model.

Our advice would be to get yourself a moped if you're 16 and really need motorised transport. You only have to wait until you're 17 to take your full driving test and get a proper car, at which point the options look far more enticing.

Click here to read our step-by-step guide on how to go about getting your driving licence.