Our man made his first ever trip to Le Mans this year, here’s what we found out on the Circuit de la Sarthe. 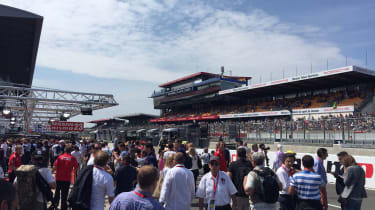 Over 260,000 people make the annual petrolhead pilgrimage to Le Mans – a semi-permanent race track 130 miles south west of Paris, France. They come from all over the globe, often in stunning classic sports cars or sleek modern supercars, to stay up all night watching various teams, cars and classes compete on the famous circuit.

Inexplicably, I’d never been before and that simply wouldn’t do. Here’s what I learned from my first ever trip to Circuit de la Sarthe.

Many of the drivers hardly sleep

Despite being part of teams of three (and many more behind the scenes) the drivers at Le Mans barely sleep during the 24-hour race. We chatted to Oliver Jarvis – one third of Audi’s #8 R-18 e-tron – who told us that after you get out the car your “blood is pumping so fast with adrenaline coursing your veins, it’s almost impossible to switch off”. 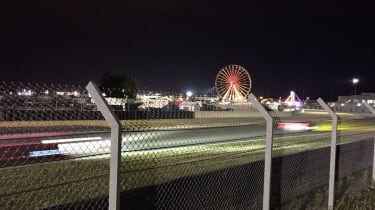 A lot of them drive in three-hour shifts, coming into the pits to switch drivers after roughly 50 laps. But when they get out of the car they need to analyse their performance and strategy with the team’s engineers before they can even think about topping up with food and water. By the time they’ve done all that, they may only get 20 minutes kip before their next stint.

Air-con is far too heavy

Despite weighing only two or three kilos, air-con is considered far too heavy for a LMP1 race car. Cooling suits with cold water pipes are also a no-go, so drivers are forced to make do with a pair of measly vents, which direct fresh air into the cabin at 200mph. That said, air-con is in fact mandatory in GTE – with cockpit temperatures monitored by the FIA. 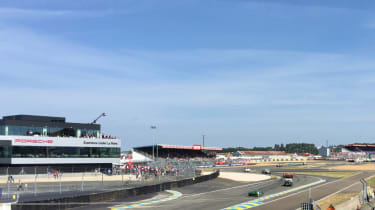 It gets extremely hot behind the wheel, with the individual drivers forced to concentrate flat out for up to three hours at a time. As a result, they can sweat out as much as three kilos of their bodyweight per stint – even after taking on several litres of fluid during the race.

Windscreen washers are near enough useless

Many of the cars have windscreen washers, but after shooting down the Mulsanne straight at 200mph, the bugs, dirt and grime mix is so engrained on the windscreen that using the wipers can often make the situation worse.

Audi number eight driver, Jarvis, told us they need to be really careful using the windscreen wiper. “The risk of smearing is so high,” he said, “And if there’s oil on the screen you can reduce visibility to zero.”

The cars do have tearable film on the windscreen, but the supply is limited. After about 12 layers the view becomes too distorted, so it’s therefore a bit of a toss-up between ripping one off or scrubbing the screen during a pit stop.

People come from all over the world to watch

People come from all corners of the globe to watch Les 24 Heures du Mans.

Driving down from Calais you encounter Brits, Belgians, Germans and the Dutch, in everything from Ferraris and TVRs to sports bikes and windowless Caterhams. We made the trip in a new Audi TT Roadster, and got caught in the rain at 80mph more than once. But at least we had the option of a roof – those on bikes are far braver than us, that’s for sure. 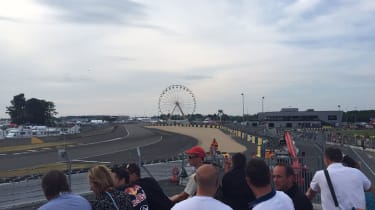 Looking around the various car parks and campsites, you’ll notice Le Mans hosts one of the most eclectic mixes of nationalities of any event in the world. A highlight for me was chatting to an Australian and a German at 2am on Sunday about the pros and cons of endurance racing. I think we were all a little delirious, as I couldn’t tell you our conclusion!

Safety cars can come in threes

Instead of there just being one safety car, several are stationed around the track for deployment at any time. This allows the marshals to control an area around an incident and slow traffic down accordingly. Audi’s Oliver Jarvis told us this can have a big affect on any one team’s advantage, and can play havoc with tactics.

If at full race pace the gap between two cars is 20 seconds and a safety car pulls out in between the two, the car in front can then carry on and catch up with the back markers. The second car is then held up, which Jarvis told us “can result in a gap of up to two and a half minutes.”

In addition to the safety car rules, Le Mans marshals can deploy specific yellow zones, to control speed in certain areas of the track. It’s much less intrusive than a safety car, and seemed to work well at Le Mans 2015. 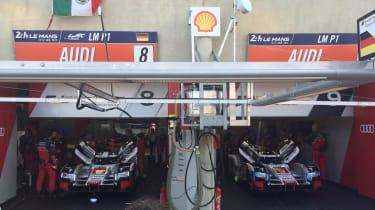 The cars are more efficient than ever

Despite the huge performance gains, today’s World Endurance Championship cars are more economical than ever before. The third, fourth and seventh place Audis from this year’s race use a V6 TDI diesel engine with 550bhp – but it actually uses 40 per cent less energy than the team’s first V12 TDI race car from 2006.

Audi tells us that its three R18 e-tron models recuperated a total of 1,263 kWh over the 24-hour race – enough to supply the average family home with electricity for more than five months. The regenerative brakes store energy, which can in turn be used to boost acceleration out of corners.

What did you think of the action at Le Mans 2015? Let us know in the comments section below...